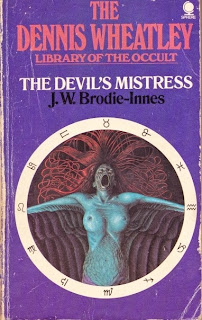 The Devil’s Mistress, a novel of witchcraft set against the background of Scotland in the 1650s, was published in 1915. Its author, John William Brodie-Innes (1848-1923), was a member of the Hermetic Order of the Golden Dawn so this is not quite the sort of potboiler you might expect from the lurid title.

The author claims to have based his story on actual events and actual persons, a claim also backed up be Dennis Wheatley in his introduction to the Dennis Wheatley Library of the Occult edition. There’s certainly no doubt that Sir Robert Gordon, the Wizard Laird, was an actual historical personage and that he really was at the very least a dabbler in occult practices.

The story centres on Isabel Goudie, a young woman raised as a Catholic but forced to accept the Protestant faith and forced (or at least pressured) also into marriage with a man below her station, a dour and rather uncouth farmer named John Gilbert. Her boredom and her resentment, and her desire for romance and adventure, will lead her to become involved in some very strange events.

The Reformed Kirk appears to be in very firm control but there are still numerous Catholics in the district, practising their religion in secret. Father Blackhall ministers to the spiritual needs of the oppressed Catholics, adopting a series of ingenious disguises to avoid detection.

Witchcraft is also a strong presence in this district. Sir Robert Gordon preserves the outward appearances of conformity with the Reformed Kirk but he is in fact in sympathy with the Catholics, while at the same time pursuing his passion for alchemy and his insatiable thirst for occult knowledge. Sir Robert’s knowledge of these subjects is extensive, as a result of a pact he made with Satan years earlier. Sir Robert is aware of the dangers inherent in such a pact but he has go the better of the Devil in the past and believes he can do so again.

Isabel becomes involve with Satan as well. She knows him as the Dark Master and she becomes his lover, hunting with his coven on a regular basis. The coven hunts the most challenging game of all, man. Their victims are many and Isabel herself has been responsible for the deaths of many of their victims. Despite this Isabel is in an equivocal position. She has renounced her baptism into the Reformed Kirk but even Satan does not have the power to allow her to renounce her Catholic baptism.

Isabel’s story is one of romance, excitement and violence. Isabel is not however purely evil. Paradoxically she often uses the powers given to her by Satan to do good, and in particular to help her friend Jean Gordon. Jean is in love with the handsome Cosmo Hamilton, a scion of one of the great old families of the region and a bitter enemy of both the Reformed Kirk and of Cromwell’s government.

Isabel also venture into the fairy kingdom, the realm of Middle Earth. The fairies are by no means in league with Satan but they have a kind of agreement with him, whilst obeying their own laws.

You expect an occult thriller to be a straightforward conflict between the powers of good and the powers of evil but this story is much more complex. There are many powers, some good, some evil, some neither good nor evil. Satan is the master of the material world but his powers do not extend into the various other spiritual and otherwise non-material worlds. This is a story of the conflict between the powers of Satan and the powers of God, but it is also a struggle between the Reformed Kirk and the old Catholic faith. Neither Father Blackhall nor Sir Robert Gordon are of Satan’s party but that does not inhibit them from mixing with him on a social basis. The Devil is a gentleman and he is an entertaining and charming social companion. Father Blackhall is on friendly terms with him because he knows that Satan has no power over him, and socialising with your enemy is a good way of learning more abut him.

Isabel’s desire to help Jean and Cosmo, and later to help Sir Robert in his attempt to evade paying his debt to Satan, will drive a wedge between her and her and the Dark Master.

Both isabel and Sir Robert are gamblers and they are playing for the highest stakes of all. The Devil is a formidable opponent but he is a gentleman and he does play by the rules.

This is a novel teeming with ambiguity. Apart from the Dark Master the human characters are neither purely good nor purely evil. Both Isabel and Sir Robert have imperilled their souls but they are by no means irredeemably lost. Isabel in particular has sinned grievously but she has also committed acts of charity and even piety.

The author’s sympathies clearly do not lie with the Reformed Kirk but his attitudes towards the Devil are ambiguous. The Devil is certainly a terrifying threat to a person’s immortal soul but he is, by his own lights, an honest adversary and free from hypocrisy. People who make pacts with Satan should be aware of the dangers. In general the author’s sympathies, despite his involvement with ritual magick and the occult, seem to lie mostly with the Catholic faith. Or perhaps he merely recognises that the Catholic Church’s claims to spiritual power and its ability to offer redemption are real, in contrast with the claims of the Protestant faiths. If you are in need of salvation then the Catholic Church really can deliver the goods.

Whilst dealing with fascinating questions of faith, salvation, nature of evil and the clash between the spiritual and material spheres this is also a very exciting tale of adventure. The epic pursuit of Sir Robert by the Dark Master, each mounted on supernatural steeds, is a thrilling adventure tour-de-force. The storm conjured up by Isabel to cause the shipwreck of the brigantine carrying the captured Cosmo Hamilton to slavery is another exciting high point.

More interest is added by the story’s claims to being based on actual events, although of course the historical records furnish only a bare outline which Brodie-Innes has fleshed out with considerable skill. Even more interest is added by the hints the author drops that at least some of the events described may be dreams, although these dreams may perhaps at times have more reality than what we normally think of as the real world.

The Devil’s Mistress is a fascinating and complex and highly entertaining, as well as very unusual, occult thriller. It’s easy to understand why Dennis Wheatley was so enthusiastic about this book. Brodie-Innes is a sadly neglected writer and fans of the horror, gothic and occult thriller genres will find much here to enjoy as well as considerable food for thought. Very highly recommended.
Posted by dfordoom at 8:33 AM