Agatha Christie’s Cards on the Table 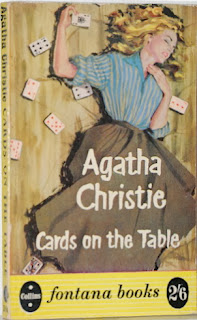 Agatha Christie’s 1936 novel Cards on the Table provides us with an intriguing setup for a murder mystery. A certain Mr Shaitana has arranged an evening’s entertainment. He has invited eight guests. Four of them are murderers and four are detectives of one kind or another.

The four sleuths comprise a mix of the professional and the amateur. Among them is a certain Belgian gentleman by the name of M. Hercule Poirot.

We know pretty much from the beginning which of the guests are murderers and which are detectives. A minor complication is that although Mr Shaitana is certain in his own mind that he is correct about the four murderers there is in fact a slight element of doubt. Poirot is not entirely convinced that all four have actually committed murder, but he concedes that Shaitana is undoubtedly correct about at least three of them.

Mr Shaitana is a gentleman of uncertain origin and it has to be said that he is not an especially pleasant person. Poirot for one finds the whole idea of this little gathering to be rather distasteful. Poirot does not consider murder a suitable subject for such entertainments.

After dinner the guests settle down to bridge. It goes without saying that the evening’s festivities culminate in murder. Christie here adds a nice twist - the slayer could only be one of four people in a particular room of the house at a particular stage of the evening, and those four people happen to be Mr Shaitana’s four murderers.

Physical clues play a fairly unimportant role in the subsequent investigations. This murder can only be solved by a careful study of the psychology of the four suspects. Poirot’s method is ingenious. He studies the psychologies of the suspects by means of analysis of their card playing. His firm belief is that the murderer planned and carried out the murder in exactly the way he or she played bridge.

Christie was not always entirely scrupulous in adhering to the accepted rules of the golden age detective story of the 1920s and 1930s. The idea of rules that a writer should follow is one of the conventions of the golden age that would attract considerable derision from later generations of crime writers. In fact following such rules was an entirely sound approach. It forced writers to impose a very healthy discipline upon themselves and it forced them to treat the reader with respect. As these rules gradually fell out of fashion crime fiction became less entertaining, with the reader being more and more likely to feel that the writer had wasted his or her time.


What is perhaps most surprising about Christie’s stories is that she was able to bend or even break the rules without entirely ruining the reader’s enjoyment. In this case she takes this habit perhaps a little too far. By doing so she provides herself with some additional plot  twists but I’m personally not quite convinced it was a worthwhile tradeoff.

In spite of this minor reservation this book is a sparkling display of Christie’s powers. Poirot  is as amusing as ever. Few crime writers have blended gentle humour with crime-solving quite so skillfully as Christie.

This book was, alas, brutally butchered when it was adapted as an episode of the increasingly irritating and loathsome Poirot TV series. Never has a TV crime series started so promisingly as this one only to descend to the very lowest depths of heavy-handed agenda-driven bad television. Luckily we still have the book, and it can be thoroughly recommended.
Posted by dfordoom at 10:59 PM