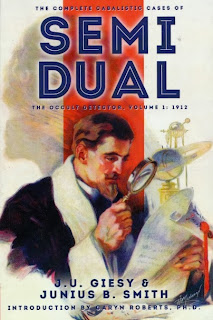 The Complete Cabalistic Cases of Semi Dual contains the first three adventures of occult detective Semi Dual, originally published in the pulp magazine The Cavalier Magazine in 1912. All three are novella-length, and all three will provide a good deal of enjoyment to pulp fiction fans.

The narrator is newspaper reporter Gordon Glace. Glace is a typical newspaperman in his zeal for scoops but while he’d do just about anything to get a story in other respects he’s honest and he’s a kind of frustrated romantic. In the first story, The Occult Detector, he is assigned to interview a mysterious man known only by the rather unlikely moniker of Semi Dual. Semi Dual turns out to be half-Persian, providing him with an exotic touch that pulp readers would be sure to appreciate. He lives on the roof of the city’s highest office building, in a kind of luxurious penthouse surrounded by a roof garden.

Glace never does get the interview but he gets something much more valuable. He becomes Semi Dual’s Dr Watson. Their first case together is a murder, a crime that is in fact the result of several other crimes including fraud and blackmail. Glace gets his first inkling of Semi Dual’s methods. Semi Dual appears to be a kind of mystic or psychic although he claims that what appear to the uninitiated to be mysterious occult powers are simply the application of scientific laws, albeit scientific laws that are unknown to modern science. His techniques include the use of astrology but also the analysis of handwriting, neatly combining the scientific and the pseudo-scientific in classic pulp style.

The Significance of the High “D” is the second story and it puts the emphasis on handwriting, but Semi Dual can learn far more from handwriting than the average expert in this field. For Semi Dual it is a window into the soul. It may offer the only hope of saving a young bank teller accused of fraud. In the course of the investigation Gordon Glace makes the acquaintance of the colourful Colonel MacDonohue Sheldon, a bizarre figure straight out of the Wild West whose speculations on the stock market are adventurous if perhaps dubiously legal. Colonel Sheldon is unquestionably a rogue but he is a rogue with an unexpected heart of gold, a man whose virtues are on the same epic scale as his vices. Colonel Sheldon and his family will figure in further adventures.

The third story, The Wistaria Scarf, is much more ambitious. The kidnapping of Colonel Sheldon’s daughter will precipitate a chase that will take Glace and Semi Dual to Paris, thence to Moscow and finally to a mountain in Persia. A mere kidnapping would not be a sufficient basis for such a full-blown pulp adventure so the authors throw in white slavery for good measure (a subject sure to appeal to readers of the pulps).

John Ulrich Giesy (1877-1947) and Junius B. Smith (1883-1945) would go on to produce dozens of Semi Dual stories between 1912 and 1934, stories that would appear in a variety of pulp magazines. Despite the character’s undoubted popularity none of the stories were published in book form until Altus Press brought out the volume reviewed here in 2013.

Occult detectives were enjoying a considerable vogue at the time. An unusual characteristic of the Semi Dual tales is that each case usually has to be solved twice. Semi Dual uses his occult (or paranormal if you prefer a more modern term) powers to uncover the identity of the criminal and to elucidate the main features of the crime. Gordon Glace then employs more conventional methods to gather the hard evidence that a court of law demands. Apart from its inherent interest this technique has the advantage that it makes Glace slightly more than just the usual Dr Watson-like sidekick; this really is a partnership to which both partners contribute.

Semi Dual is the kind of larger-than-life, slightly exotic, definitely eccentric and somewhat mysterious figure that any good fictional occult detective should be. He is clearly a gentleman (his father was a Persian nobleman), he is chivalrous and he is devoted to the pursuit of justice. For Semi Dual crime is an offence to the natural laws of the universe and is thus doubly heinous. Semi Dual is a man of great charm and despite his rather aloof manner of life he is possessed of considerable warmth and kindliness. He has just enough of a quixotic streak to make him more than just a crime-solving machine.

Of course Semi Dual comes across as arrogant, as do so many of the great fictional detectives of both the occult and non-occult sub-species. Readers of the pulps would be unlikely to be greatly bothered by this and he is at least arrogant without being petty.

The publication of this volume is cause for celebration for aficionados of occult detective stories. The three tales included herein are thoroughly enjoyable and the superiority and greater ambition of the third story suggests that a future volume containing more of these stories might well be even more entertaining. Highly recommended.
Posted by dfordoom at 12:21 PM