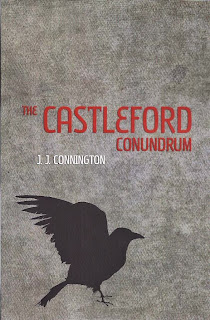 The Castleford Conundrum, published in 1932, was one of J. J. Connington’s detective novels featuring Chief Constable Sir Clinton Driffield and it’s a fine example of the classic British detective story of the so-called golden age.

The Castleford Conundrum belongs to the then very popular sub-genre of the country house murder tale.

Winifred Castleford is a particularly disagreeable woman. She is vain, stupid, vicious, manipulative and domineering to the highest degree. Her husband Philip belongs to that very unfortunate class of men, those who have married for money. Like most such men Philip has discovered that there is a very high price to be paid for such a decision. Philip has paid the price in shame and humiliation and his misery is about to be compounded. Winifred has decided to write him out of her will.

In Philip’s defence it can be said that he married Winifred largely because it seemed to be the only way to provide for his daughter by his first marriage, Hilary Castleford.

Winifred had been married before, to a wealthy war profiteer named Ronald Glencaple, now deceased. Glencaple’s two brothers, Laurence and Kenneth, have little money but they hold the firm conviction that they are entitled to the wealth of their late brother. Winifred’s half-sister Constance Lindfield also feels she is entitled to this money. In fact no-one likes Winifred but everyone seems to be interested in her money. All in all it’s an exceedingly unpleasant family. Equally unpleasant is a young man named Stevenage who has at various times been pursuing Mrs Castleford, Miss Lindfield and Hilary Castleford.

When Winifred is found dead there’s not the slightest doubt that her passing is regretted by nobody. The possible motive for the murder hinges on the very complicated situation surrounding Mrs Castleford’s will, or rather wills. There are two wills but there is a possibility that neither may be valid. The disposition of Winifred Castleford’s substantial wealth will be very different depending on which will, if any, proves to be valid. To add a further complication the various suspects all had different beliefs as to the exact state in which Winifred’s testamentary affairs stood at the time of her death.

And all of the suspects had plausible motives other than money for wishing to see Winifred Castleford depart this vale of tears.

Inspector Westerham is an able man and his investigations have been thorough and methodical but the murder is still far from solved when the Chief Constable, Sir Clinton Driffield, finds himself drawn into the case. Driffield’s friend, the Squire Wendover (who appears in many of the Clinton Driffield mysteries) is the agency by which Driffield becomes involved.

Driffield is not one of the more amiable of fictional detectives but although his methods sometimes appear to be a little insensitive there’s no question that he is a man who gets results, and in his own way he’s an intriguing character.

Connington is now largely forgotten outside the small circle of hardcore aficionados of the detective fiction of the golden age but this neglect is very unjust. Connington’s plotting is as skillful and as intricate as any devotee of crime fiction could wish for. And while he was one of the group of English writers dismissed by critic Julian Symons as constituting the “humdrum school” of detective fiction he was in actuality a fine writer who knew his craft.

Connington’s science fiction novel Nordenholt’s Million demonstrates his interest in difficult moral dilemmas and in the psychology of men who are natural leaders and who must face the terrible choices that leadership entails. Sir Clinton Driffield is a man of that type as well, the sort of man who may appear arrogant and insensitive but who in fact simply have a keen sense of reality. Reality can be very unpleasant but refusing to face reality can be more unpleasant still. Sir Clinton Driffield will never be tempted into a willful refusal to face reality.

Connington also had the ability to create unlovable but fascinating minor characters. Not one of the characters in this novel could be described as being the type of person one would like to be intimately involved with but not one of them fails to engage our interest.

The Castleford Conundrum is a worthy representative of the detective fiction of the interwar period at its best. Highly recommended.
Posted by dfordoom at 1:40 AM