The Eye of Osiris 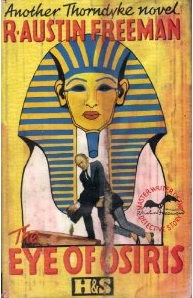 The Eye of Osiris, published in 1911, was the second of R. Austin Freeman’s many Dr Thorndyke mystery novels. And a very good mystery it is too.

R. Austin Freeman (1862-1943) is unfortunately little know today except to devotees of vintage crime but this English writer was one of the masters of the detective story and Dr Thorndyke was his greatest creation. Freeman was a qualified doctor and he made considerable and effective use of his medical knowledge in his fiction.

Thorndyke is the scientific detective par excellence, a lecturer in medical jurisprudence. He is interested in facts which he organises with an almost brutal meticulousness. He has little time for speculation and no time at all for leaps of intuition. He is not even concerned overmuch with motives. Give him the acts and he will find the one person who could have committed the crime, whose guilt would be consistent with those facts.

The Eye of Osiris is concerned with the mysterious disappearance of Mr John Bellingham. A man of regular habits does not call at his cousin’s house, find him not at home, tell the maid that he will await his return, and then simply vanish. But that is what Mr John Bellingham appears to have done.

Dr Thorndyke initially has no involvement in this case.  He reads about it in the newspaper and notes it as being an excellent example of a point he has just been making to his students - the crucial importance in such a case of establishing the last time (and the last place) at which the presumed victim can be said with absolute certainty to have been still alive. He discusses it with his young assistant Dr Jervis and with a former student, Dr Paul Berkeley (who happens to be the novel’s narrator).

Two years later the mystery is still involved and Dr Berkeley finds himself having a chance (but momentous for all concerned) encounter with the Bellingham family. He is called in to treat the vanished man’s brother, Godfrey Bellingham, who is now living in poverty. And he discovers there is much more to this case that was apparent two years earlier. John Bellingham made a fiendishly difficult will, a will that could restore Godfrey’s fortunes, or leave him condemned to perpetual penury. An acrimonious legal case is now imminent. Dr Berkeley also happens to fall in love with Godfrey’s daughter Ruth.

Godfrey is a proud man, unwilling to accept help that he cannot pay for, but Dr Berkeley eventually persuades him that if his old mentor Dr Thorndyke were to accept the case it would not be charity since the case is so complex and so likely to produce interesting legal precedents that he would actually be doing Dr Thorndyke a favour by allowing him to become involved. Which is at least partly true - Thorndyke really is eager to get to grips with what should prove a most challenging case.

The challenge is firstly to establish if John Bellingham really has been murdered, secondly to find out who murdered him, and thirdly to find a way of fulfilling an apparently impossible clause in the will.

Oddly enough almost everybody involved in this affair shares a passion for Egyptology, a factor that will assume considerable importance.

Dr Thorndyke himself is by no means a colourful personage- the fascination of the character lies in his methods rather than his personality.

Freeman manages to combine a classic puzzle mystery novel (the Thorndyke novels can in some ways be seen as launching the golden age of detective fiction) with a love story. His style is not flashy but nor is it dull.

The great strength of the novel lies in the plotting which is ingenious enough and complicated enough to satisfy any fan of the puzzle-style of mystery story.