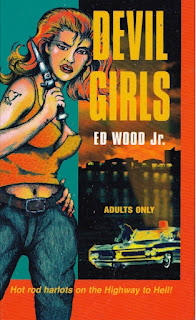 Ed Wood Jr was a film-maker of legendary status, notorious for being often voted (quite unfairly) as the worst film-maker of all time, the man responsible for such schlock classics as Plan 9 from Outer Space. What is less well-known is that he was also a prolific novelist.

His novels were lurid pulpy shockers and were regarded at the time as being pornographic (although such a description seems absurd today).

Devil Girls was published in 1967, and lurid it most certainly is. The front cover assures us that it is a tale of “Hot Rod Harlots on the Highway to Hell” and the description is entirely accurate.

A small town in Texas, on the Gulf of Mexico, has a major problem with juvenile delinquents (always a favourite subject for Wood who wrote the screenplay for the delightfully outrageous juvenile delinquent movie The Violent Years). In particular, the town is menaced by a girl gang known as the Chicks. This gang is involved in an uneasy partnership with an equally unpleasant gang of young males.

A teacher at the local school has been brutally murdered, and these teenage tearaways are the prime suspects. Both the male and female juvenile delinquents are dopers. Not just marijuana, which would be bad enough, but many are also hooked on heroin or on the even more dangerous combination of heroin and cocaine. The Chicks have been recruited by a local drug dealer to act as drug couriers. This dealer, an objectionable individual known as Lark, brings the drugs in by boat but he needs the girls to carry the drugs from the boat to the dockside. His plan is that the girls will conceal the drugs about their persons, mostly in their bras.

And here we find one of the many touches that mark this book as unmistakably the work of Ed Wood - an interest in female undergarments that is both keen and slightly odd. There will be plenty of other such touches.

Battling these youthful miscreants is the overworked but indefatigable Sheriff Buck Rhodes, ably assisted in his crusade against youth crime by the handsome and dedicated young Reverend Steele. The sheriff will have to find a way to stop a major drug shipment from coming ashore and he has few leads to work with.

The leader of the Chicks is Dee, but as her heroin habit grows her control over the gang is starting to slip. She has even bigger problems when the former leader of the Chicks, Lila, breaks out of prison and returns to town, seeking vengeance on those she considers to be responsible for her misfortunes (which means pretty much the whole population of the town but especially her mother). Lila is doing a life sentence for a murder rap. Lila’s kid sister Rhoda is one of the Chicks.

The book is rather like Ed Wood’s movies - it’s both incompetent and entertaining. Although it has to be said that by the standards of pulp fiction it’s by no means as badly written as you might expect. It has a coherent plot and some memorable characters. It builds to a reasonably exciting climax. And it has a deliciously sleazy atmosphere.

Wood’s unconventional sexual tastes are certainly on full display. There is of course a concern for women’s clothing - none of the girls is ever described as simply taking off her sweater. The sweater is lovingly described, especially if it is a pink angora sweater (one of Ed’s favourite garments). There is also a rather disturbing interest in bodily functions.

If you’re a fan of Ed Wood’s movies (and I can’t imagine any right-thinking person not being a fan of his movies) then it’s certainly worth checking out his literary output as well, even if it’s only for their curiosity value and the light they shed on this distinctive icon of American pop culture.
Posted by dfordoom at 7:06 AM