Belphégor: The Phantom of the Louvre, 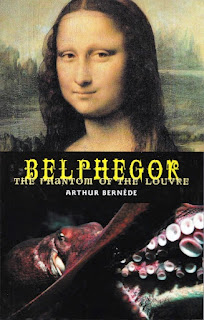 Arthur Bernède (1871-1937) was a French author who wrote both prose and poetry as well as libretti for operas. HIs most famous creation was Judex, a popular pulp hero who was immortalised in Louis Feuillade’s 1916 movie serial (Feuillade and Bernède collaborated in the creation of the character). In 1927 he wrote Belphégor: The Phantom of the Louvre, which combines elements of both the mystery and the horror story.

Bernède founded a company in 1919 to produce novels and films simultaneously. Belphégor was also published as part of a movie-book tie-in (something that Bernède seems to have invented half a century or more before Hollywood cottoned on to the idea). The 1927 movie was directed by Henri Desfontaines.

Belphégor is very much in what was by then the well-established tradition of French pulp fiction, a tradition that was established by Allain and Souvestre’s immensely successful 1911 novel Fantômas. The style of Belphégor is very cinematic, with very short chapters corresponding to scenes in a movie. The pacing is relentless and the style is breathless.

A daring thief has been at work at the Louvre. He disguises himself with a hood and a mask, leading to the popular supposition that this is no man but a ghost. In fact the reader never doubts that the Phantom is merely a particularly bold and clever criminal. The thief has taken the sobriquet Belphégor, from a malevolent demon of the same name (one of several hints of the gothic in this novel).

Inspector Menardier is in charge of the case but he’s not the only one hunting the Phantom. Also on the thief’s trail are a private detective named Chantecoq (popularly known as the King of the Detectives) and a popular journalist named Jacques Bellegarde.

Bellegarde has other problems to deal with. Mlle Simone Desroches, a female poet who is the darling of the aesthetes, is madly in love with him. Bellegarde has tired of her attentions and will soon fall in love with Chantecoq’s daughter Colette. These problems are soon overshadowed by a much bigger one - Bellegarde is regarded by the police as the prime suspect in the Louvre robberies. And a guard was killed, so the unfortunate Bellegarde could find himself facing the guillotine.

What is the criminal Belphégor seeking in the Louvre? Nothing less than the fabled Valois treasure, rumoured to be concealed somewhere in the Louvre. The exact whereabouts of the treasure are revealed in an old manuscript.

Chantecoq is convinced that Bellegarde is innocent but he will need all his skill to prove it and to find the real thief. Luckily Chantecoq, like all good detectives of his era, is a master of disguise.

The novel contains everything you could want in a pulp novel and then some. There’s a mystery to be solved, there’s adventure, there’s a diabolical criminal mastermind with a hunchbacked henchman, there’s a master detective, there’s romance and there are secret passages under the Louvre. Bernède combines all these elements with considerable skill and the novel is undeniably exciting and entertaining.

There was a new French movie version of this novel made in 2001 but I know nothing more about it.

Belphégor: The Phantom of the Louvre is pure pulp fiction fun.
Posted by dfordoom at 8:01 PM