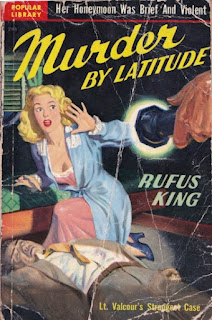 Rufus King (1893-1966) is a now forgotten American mystery writer. Murder by Latitude, published in 1930, was one of the novels featuring his best-known detective, Lieutenant Valcour.

The SS Eastern Bay is a freighter recently converted to carry a small number of passengers. For most of the passengers this is strictly a pleasure cruise, but for two of them it means deadly serious business. One is a murderer, the other is Lieutenant Valcour of the New York Police whose job it is to find that killer.

It should be a fairly easy job for Lieutenant Valcour - all he has to do is to wait until the New York Police send him a radio message containing an eyewitness description of the murderer. When the ship’s radio operator is found dead in circumstances suggesting foul play his task becomes somewhat more difficult. The Eastern Bay is a small ship and carries only one radio operator. No-one else on board the ship can operate the radio. So now Lieutenant Valcour is on his own and he must find the killer before he strikes again.

Without a description his task seems hopeless, but there is a reason the killer has taken the cruise. If he can uncover that reason he should be able to unmask the slayer. To add a further complication, he realises he’s not even certain the killer is male.

All he does know is that it’s a passenger, not a member of the crew. That still leaves plenty of suspects. There’s the wealthy Mrs Poole, accompanied by husband number five. There’s Mr Wright, who looks harmless but then murderers can look harmless. There’s young Mr Force. There’s the gleefully cynical M. Dumarque, who glories in his own (largely imaginary) wickedness. But that could be a clever blind. And there’s Mr and Mrs Sanford. It could be any one of them. And of course it could be a stowaway.

Valcour can rely on some help from the captain of the ship, an old sea dog named Sohme who proves to be surprisingly sentimental.

This is a classic set-up for a murder mystery - isolate a group of suspects so that the reader knows the murderer must be one of a limited number of suspects, and none of the suspects can escape. Nor can their potential victims.

King handles this setup with considerable skill and also makes good use of the shipboard setting. At times the sea itself seems as sinister as murder. Not that the ship encounters any storms. Just fog, drizzle and overcast weather. Especially fog. The captain is reduced to navigating by dead reckoning. The fog, added to the loss of their only radio operator, also makes it impossible for anyone to contact the ship or for them to contact anyone else (rather like the classic mystery device of isolating a group of people in a country house in a storm and having the telephone wires go down). The fog is a more subtly sinister way to achieve the same end, and the fact that the captain cannot even say with absolute certainty where the ship is adds to the tension.

Valcour is not a colourful detective but he has his human touches - he is genuinely spooked by the fact that they don’t know where they are and he is totally cut off from the normal resources that would be available to a cop. Not only is the ship beset by fog - he feels himself surrounded by a kind of mental fog. Captain Sohme proves to be an engaging and interesting supporting character.

Murder by Latitude is a fine example of the crime fiction of the 1930s and it’s also one of the best examples of the shipboard mystery novel. Highly recommended.
Posted by dfordoom at 3:14 PM