The Bride of Fu Manchu 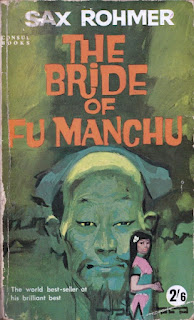 The Bride of Fu Manchu was the sixth of Sax Rohmer’s Fu Manchu novels, and was published in 1933. It’s also in my opinion one of the best.

A mysterious epidemic is sweeping through southern France. Dr Petrie, who has something of a reputation for his knowledge of tropical medicine and exotic diseases, has been asked by the French government to lend assistance. What he finds is very disturbing indeed. The disease seems to be a form of plague, but with some unusual features. Equally disturbing is the presence of insects that appear to be hybrids never seen before, and he suspects they may be the carriers.

The young botanist Alan Sterling, an old friend of Petrie’s, is in southern France recuperating from a bout of blackwater fever picked up in the Amazon Basin. Sterling (who is the narrator of the book) earns his living as an orchid hunter, an occupation that takes him to many strange places and exposes him to many deadly risks. Danger has been his constant companion and his courage will serve him well in the adventure to come. Sterling has noticed things as well - plants that just don’t look right.

Sterling has already had an unusual encounter of a different kind, with a beautiful and exotic young woman named Fleurette on the beach at Ste Claire de la Roche. She appears to be the mistress of the mysterious and wealthy Mahdi Bey, but Sterling finds it difficult to believe that such a vision of loveliness, and such a charming young woman, could live her life in such a sordid manner. Fleurette will later have a major and very unexpected role to play in this story.

The thought that Dr Fu Manchu may be the guiding hand behind the strange epidemic has certainly crossed Dr Petrie’s mind. Dr Petrie believes he is on the verge of finding a cure when he is suddenly struck down by this plague-like illness.

Sterling will soon have confirmation of Fu Manchu’s involvement when Dr Petrie’s old friend (and Fu Manchu’s great nemesis) Sir Denis Nayland Smith arrives on the scene, but has Sir Denis arrived too late to save Petrie? And why does Nayland Smith seem to know something about Fleurette, something that disturbs him?

Sterling will be drawn into the battle to defeat yet another vast conspiracy of the Si-Fan, and will find himself facing not only Dr Fu Manchu, but also Fu Manchu’s daughter Fah Lo Suee (a woman who is as formidable and terrifying in her own way as Fu Manchu himself). But what exactly is Fah Lo Suee’s agenda?

If you enjoy tales of sinister diabolical criminal masterminds (and surely every right-thinking person does enjoy such stories) then The Bride of Fu Manchu delivers the goods. Dr Fu Manchu is one of the great fictional villains, as evil and dangerous as Sherlock Holmes’ great nemesis Professor Moriarty but much more colourful. Fu Manchu is a complex character, an implacable enemy but a man with a strong sense of honour. If Fu Manchu gives you his word about something then he will keep it, and will honour not just the letter of his promise but its spirit as well. He is a villain, but he is also a gentleman.

Fu Manchu is no mere cut-throat. He is a man who believes in things. The things in which he believes might make him a dangerous menace to western civilisation but it can never be doubted that his beliefs are sincere. He is, in his fashion, a great man.

This is a thrilling adventure yarn. I have no hesitation in warmly recommending it.
Posted by dfordoom at 3:03 AM