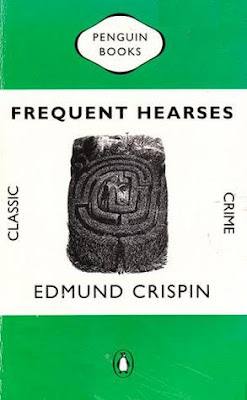 Frequent Hearses is the second of Edmund Crispin’s Gervase Fen mysteries that I’ve read. I think it’s fair to say that the best things about Crispin’s novels are Gervase Fen himself and Crispin’s delightfully witty writing style.

Published in 1950, Frequent Hearses is a story of suicide and murder within the British film industry. Professor Fen happens to be working at the film studio, as an adviser on a biopic about the poet Pope, when the suicide of a promising young actress arouses his suspicions.

The plot is one of those typical murder mystery plots that perhaps relies just a little too much on coincidence. It’s all enormous fun though, and there’s so much amusement to be derived from Fen's encounter with the wonderful world of movies. A great book to curl up in bed with.
Posted by dfordoom at 4:19 AM