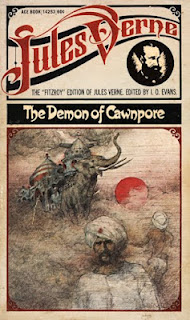 Jules Verne’s 1880 novel The Steam House is one of his lesser known works, but one not without interest.

In the 1860s an assortment of English and French travellers undertake an extraordinary journey through India by elephant. But this is no ordinary elephant. This is a steam elephant! And they travel in style, the steam elephant (affectionately christened Behemoth) pulling behind it two well-appointed and comfortable houses.

This idea had been put to an engineer named Banks that while travel was pleasant it was even more pleasant to remain in one’s home. Banks proposed a solution to this dilemma - he would contrive an invention that would allow a party of adventurous souls to make a lengthy journey without the necessity of ever leaving behind the comforts of home. His invention, Steam House, would be a luxurious wheeled house drawn by a powerful steam traction engine.

In fact not one house but two, it being naturally desirable to have a separate house to contain the provisions needed for such a journey along with the servants. Since all Englishmen are of course eccentric and whimsical he builds the traction engine in the form of a gigantic mechanical elephant.

This turns out to be more than a mere pleasure jaunt. One member of the party is Colonel Munro, whose wife was brutally slain at Cawnpore during the Indian Mutiny. Munro was able to take vengeance on some of the mutineers but the leading spirit behind the Mutiny, the redoubtable Nana Sahib, escaped. Colonel Munro and Nana Sahib remained sworn and implacable enemies. Rumours of both Nana Sahib’s death and his continued existence have swept the sub-continent but just before this story starts an apparently certain report of his death seemed to have closed this chapter of history. Colonel Munro however does not believe that his old enemy is truly dead.

That is why the colonel agreed to join the expedition - he hopes to find evidence of Nana Sahib’s whereabouts and finally bring him to justice.

Captain Hood has other reasons to undertake this journey. A keen hunter, he hopes to being his tally of tigers to fifty. The other members of the party are motivated mostly by the sheer pleasure and interest of the journey that will take them to the foothills of the Himalayas.

As was his usual practice, Verne delights in making his account as detailed as possible. At times this slows the narrative down and the first half of the tale is a little on the slow side. It starts to gather steam, so to speak, by the halfway point when the party meets up with an eccentric Dutch animal zoologist collecting live animals for European zoos. And it really picks up when they find themselves on the trail of a deadlier prey than tigers - Nana Sahib himself!

The rights and wrongs of the Indian Mutiny and of the Raj have been endlessly debated and I have no intention of adding anything on that subject. Nor wilI I venture any opinion on subjects such as tiger-hunting. Verne is mostly concerned with telling a tale of adventure. It is a tale of its time but it is still an intriguing and on occasions exciting story.

For some obscure reason Wildside Press elected to publish this book in two volumes, the first being The Demon of Cawnpore, the second being Tigers and Traitors. It’s not a particularly long novel and there is no reason at all to break it into two halves. On the other hand they are to be commended for making such an obscure work available in English. The translator is not named but the translation maintains the feel of a 19th century novel, avoiding any annoying tendencies to intrude modern idioms or prejudices but still being enjoyable and highly readable.

If you’re a fan of Verne, or of 19th century stories of travel and adventure, there is sufficient entertainment here to make it worthwhile seeking out this forgotten book.
Posted by dfordoom at 7:04 AM