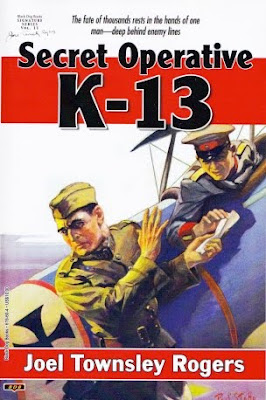 One of the more popular although these days sadly forgotten sub-genres of 1920s and 1930s pulp fiction was the aviation adventure story, of which Joel Townsley Rogers’ Secret Operative K-13 is an example.

Some of these tales were straight aerial combat stories, some combined aerial combat with espionage, some followed the adventures of former World War I air aces in exotic locations in the between wars years while others (such as Donald Keyhoe’s Philip Strange stories) added science fiction, the paranormal and magic.

It’s ostensibly set in 1916 although there are some anachronistic features (Sopwith Camels and tanks). The story was originally serialised in the pup magazine Everybody’s from December 1928 to February 1929 and Black Dog Books’ edition is claimed to be its first appearance in book form. It’s likely the anachronisms were the result of sloppy sub-editing or perhaps being a pulp author writing in haste Rogers simply forgot the story was supposed to take place in 1916!

The story actually concerns two spies, one German and one Allied. K-13 is an Allied spy in the headquarters of General von Schmee who is about to launch his VII Army Corps in a major offensive. The Germans have a spy as well, known as Number Two, in the Royal Flying Corps. A young German-born American pilot serving in the RFC, Richard Fahnestock (with the rather unfortunate nickname “Big Dick”) is caught up inadvertently in espionage when he is ordered to pose as a deserter to infiltrate von Schmee’s headquarters to rescue K-13. Or at least that’s what he is told his mission is.

Number Two has supplied von Schmee with the British order of battle and, armed with this information, von Schmee is confident of victory. So confident that his surprise attack is to be launched without artillery preparation. But while Number Two is supplying the German with information that could make the offensive the vital breakthrough on the Western Front K-13 is busily supplying the British with intelligence to foil these plans. The Germans need to discover K-13’s identity just as badly as the British need to learn the identity of Number Two.

Fahnestock finds that he’s been set up but he’s a determined if bull-headed fellow and he’s not easy to kill.

National stereotypes abound in this book. I doubt if any real Prussian or British officer would have behaved the way the characters in this story behave but this is pulp fiction and the aim is excitement and adventure rather than historical accuracy. It’s not supposed to be taken seriously. Judged purely as pulp fiction it’s quite entertaining.

The author’s name is given as Joel Townsley Rogers on the book cover but other sources give his name as Joel Townley Rogers. He wrote in various pulp genres including crime and science fiction.

The combination of spies and fighter aces in Secret Operative K-13 is hard to resist although perhaps disappointingly there are very few actual aerial combat scenes in the book. It’s still kind of fun.
Posted by dfordoom at 1:26 AM