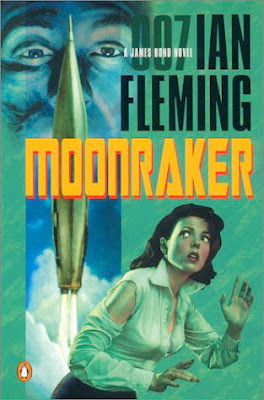 Moonraker was the fourth of Ian Fleming’s James Bond novels, appearing in 1955. By that time Fleming had the formula well and truly nailed and the result is wonderful entertainment.

A mysterious businessman has announced plans to build a missile that will ensure Britain’s defences. He is prepared to finance the project himself as a kind of gift to the nation. The rocker, known as the Moonraker, will be able to reach any city in Europe (which in 1955 made it a super-weapon).

Sir Hugo Drax is very mysterious indeed. In fact no-one is absolutely certain of his identity. During the German breakthrough in the Ardennes in 1944 a British headquarters was destroyed, and a badly burned man was found among the wreckage claiming to have total amnesia. He was tentatively identified as a former dockworker from Liverpool. After the war this man made a fortune speculating on precious metals and by the early 50s he had been knighted and with the announcement of his Moonraker project had become a sort of national hero.

Sir Hugo Drax just happens to belong to the same club as M, the head of the British Secret Service, and M had noticed something peculiar and disturbing- Sir Hugo cheats at cards. It’s peculiar because he is so wealthy he has no need to do something so petty, and it’s disturbing because in 1955 being exposed a card cheat could still mean social ruin. So it has the potential to become a matter of national security and M asks James Bond as a personal favour to find out how he does it and find a way to cure him of this unfortunate habit before a scandal erupts.

This sets up the obligatory gambling scene without which no Bond novel would be complete. Fleming was fascinated by the dangerous glamour of high-stakes gambling and always liked to find a way not only to include such a scene but also to make it integral to the plot.

The very next day a double murder takes place at the headquarters of the Moonraker project and Bond finds himself working undercover as Drax’s chief of security. Naturally there’s a beautiful woman involved, in this case a policewoman from Special Branch also working undercover in Drax’s operation. Her name is Gala Brand. At this stage of course it is still assumed that Drax is a patriotic hero and that some outside group is trying to sabotage the Moonraker. Bond will soon discover there’s more to Sir Hugo Drax than meets the eye.

Fleming’s success with the Bond novels was based on making use the traditional ingredients of the spy thriller but adding extra sex and violence and most importantly, adding extra glamour. He more or less created the stereotypical secret agent as handsome, charming, sophisticated, witty, cultured and as an all-round bon vivant. Fleming loved to drop the names, not of famous people, but of famous and luxurious products. The pages of the Bond novels are littered with references to luxury products. He was sometimes mocked for this but on the whole it was a very effective technique. Spy thrillers are after all escapist fantasies so you might as well make the fantasy as exciting as possible.

Bond also differed from earlier heroes of this type such as Richard Hannay and Bulldog Drummond in being sexually amoral. Bond is as patriotic and as courageous as Hannay and Drummond but you can’t imagine those earlier spy heroes indulging in the sexual adventures that Bond gets up to.

Fleming’s Moonraker bears little resemblance to the outrageous 1979 Bond movie of the same name. By 1979 technology had moved on and the Moonraker rocket of the novel would have seemed very dated.

The novel is immense fun and if you’ve never sampled the delights of Fleming’s spy fiction it’s as good a place to start as anywhere since there’s no particular need to read the novels in sequence. Highly recommended.
Posted by dfordoom at 3:40 AM