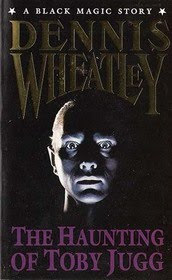 Toby Jugg, the hero of Dennis Wheatley’s 1948 novel The Haunting of Toby Jugg, is a young fighter pilot in 1942, now confined to a wheelchair after being shot down. He is also the heir to a considerable fortune, a fortune that is being administered by a board of trustees until he comes of age. He is convalescing at one of his family’s country properties in Wales. He is becoming increasingly disturbed by a strange presence, a mysterious shadow cast by the moonlight through a gap in the blackout curtains, a shadow that he is convinced is cast by a malevolent and unnatural entity trying to gain entrance to his room.

Toby is unable to convince anyone of the reality of this entity, and he slowly comes to believe that there is a plot against him, a plot to send him mad, or to make it appear that he is already mad. Is this some form of hallucination? Is this unearthly creature real or a product of his imagination? Do the people caring for him actually intend his destruction, or are they sincerely concerned for a young man whose grip on sanity is steadily weakening?

The story is told in the form of Toby’s secret journal. Wheatley was really a writer of thrillers, some of which involved occult forces and some of which involved purely human evil. It’s really an elaborate and bizarre conspiracy theory story rather than a conventional horror story. It’s impossible to take it seriously, and that’s the very quality that makes it vastly entertaining and extremely amusing even for readers who don’t share Wheatley’s political beliefs. You have to admire someone who can weave together such a complex and eccentric paranoid fantasy involving Communists, Satanists, Freemasons and modern theories of education.

As a horror thriller it’s exciting and gripping – Wheatley demonstrates considerable skill in building up an atmosphere of menace, suspicion and supernatural dread. I don’t think very many readers could approach this book the way its author presumably intended it to be approached, but if you read it with the right kind of camp sensibility it really is outrageous fun.
Posted by dfordoom at 10:22 PM