Graham Greene's A Gun for Sale 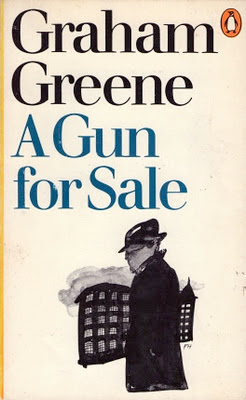 Graham Greene’s 1936 novel A Gun for Sale is probably better known for the 1942 movie adaptation, the classic film noir This Gun for Hire. In fact the movie, while excellent, bears little resemblance to Greene’s novel.

In the novel the professional hitman, Raven, is a profoundly ugly man and it’s suggested that his anti-social habits may have a great deal to do with his ugliness. He has been employed to carry out a political assassination, a deed that may well plunge the world into war. The consequences of his actions do not occur to Raven until much later.

The police don’t know that Raven was involved in the assassination. They’re after him for a robbery, which ironically he did not commit. He was paid for the assassination in stolen money, a double-cross intended to get him out of the way. Anne, the girlfriend of the policeman in charge of the pursuit encounters Raven on a train. She is kidnapped by him and he intends to kill her but a strange bond develops between them although it doesn’t follow the pattern you might expect,

The novel as written at a time when it was fashionable to see wars as something that were brought about by the machinations of corrupt financiers and industrialists and it’s surprising to see a writer as intelligent as Greene falling for such naïve explanations.

This is one of the books that Greene classed as “entertainments” rather than novels and it’s certainly a lesser work. The complex personal interactions between Raven and Anne and the psychological dissection of Raven’s severely warped personality are the book’s strengths and they’re the reasons to read this book. Recommended as a reasonably good example of the dark, corrupt and twisted world that Green was so good at creating.
Posted by dfordoom at 6:51 PM