John Dickson Carr's The Case of the Constant Suicides 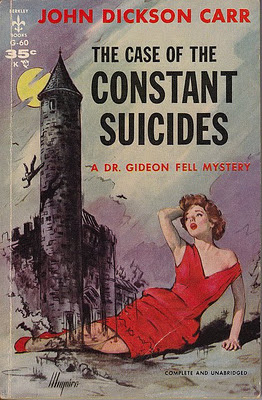 John Dickson Carr was considered to be a master of the locked-room mystery, and in The Case of the Constant Suicides (written in 1941) he gives us not one but two locked-room puzzles! One of which has a particularly ingenious solution.

An interesting feature of the book is that Carr’s detective, Dr Gideon Fell, keeps somewhat in the background. Mostly we see things through the eyes of two young scholars, Alan Campbell and his distant cousin Kathryn, who met unexpectedly when both are summoned to Scotland after the apparent suicide, or possible murder, of old Angus Campbell.

Carr goes to a great deal of trouble to show us the many differences between English Law and Scottish Law. Apart from being interesting in their own right, at least one of these differences turns out to be fairly important to the plot.

It’s all highly entertaining – Carr gives us a remote Scottish castle (really just an old house but with a suitably mysterious tower), a suggestion of ghosts, old family scandals, lots of colourful minor characters and a complex but rewarding plot. I loved it.
Posted by dfordoom at 12:01 AM