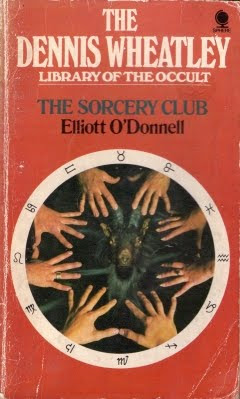 Elliott O’Donnell’s The Sorcery Club, originally published in 1912, was one of the volumes issued in the 70s as part of the Dennis Wheatley Library of the Occult.

San Francisco is in the grip of an economic collapse, and three clerks find themselves on the verge of starvation until one of them discovers a strange old book in a junk shop. The book dates back several hundred years, and is an account of the history of the lost civilisation of Atlantis and a practical guide to Atlantean black magic. By means of this tome they make contact with mysterious entities, who offer them a pact – if the three of them can abstain from marriage and from quarrelling with one another for a period of time they will have a succession of powers granted to them and of they hold to this compact for the full period they will have all of those powers for the remainder of their lives. If they break the pact they must however accept the consequences – these consequences being unspecified but presumably somewhat dire.

The powers include such desirable things as the ability to understand any kind of puzzle, mind-reading, invisibility, the capacity to inflict disease and the capability of curing all illnesses. Soon they are accumulating considerable wealth, and head off to London in the hope of even richer pickings. They establish the Modern Sorcery Company, initially setting themselves up as conjurers in opposition to England’s greatest exponents of that art, a man named John Martin. Complications naturally arise, involving rivalries for the affections of John Martin’s daughter, and the difficulty these three modern sorcerers have in restraining their own appetites, appetites that they now have the ability to indulge to the full.

Wheatley states in his introduction that he had the opportunity of meeting the author, and didn’t care for him overmuch. O’Donnell in fact comes across as a rather unattractive characer so I tend to sympathise with Wheatley on this! The characters are completely lacking in any depth, and the style is at best serviceable. Nonetheless it’s an intriguingly original little novel, with some weird and wonderfully strange occult stuff. The somewhat complex plot relies a bit too heavily on convenient plot devices although it does eventually come to a reasonably satisfactory conclusion.

A curiosity piece, but an interesting one, if you can put up with the author’s obsession with the evils of the suffragettes (he seems to view suffragettes as being responsible for just about everything that he thinks is wrong with the world). I'm personally unworried by books that reflect the views of their era so that wasn't a problem for me. I dislike the modern tendency to judge the past by our standards.