Ride the Pink Horse, by Dorothy B. Hughes 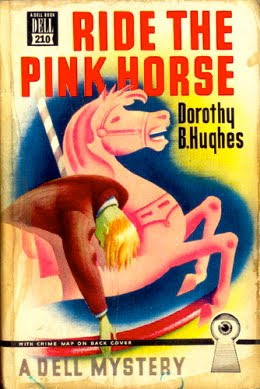 Ride the Pink Horse is rather unusual in being a 1940s hardboiled crime novel written by a woman, Dorothy B. Hughes.

Sailor used to work for a crooked senator who operated a combination political machine and crime empire based on Chicago. The senator collected a large life insurance payout after his wife was shot and killed in puzzling circumstances. The police were satisfied at the time, but now they have their suspicions. Sailor knows exactly what happened, and he’s now planning go extract a large amount of blackmail money from the senator, having tracked him to a small town down near the Mexican border where for some mysterious reason the Senator is attending the celebrations of Fiesta. The Chief of Chicago Homicide, Macintyre, also just happens to be in town for Fiesta.

Sailor and Mac are old acquaintances, Mac having been Sailor’s first arresting officer back when he was still a kid stealing cars, so there’s a kind of sentimental bond there. Mac has tried many times to set Sailor on the straight and narrow, without success, but he just can’t give up on him. Sailor isn’t evil, but the lure of easy money always wins out. Sailor is like the typical protagonist in film noir, not really a bad guy but weak-willed, a man who just can’t see that he’s heading for disaster on the fast track.

The relationships are the key things in this novel. The Sailor-Mac relationship would have been more interesting had Mac not been written as such a dull and moralising kind of guy. He would have been enough to set me off on a life of crime, so I don’t altogether blame Sailor for not listening to him. But the book was published in 1946, and I suspect American readers at that time would have had a much greater tolerance for that kind of sermonising. The love-hate admiration-contempt relationship between Sailor and the Senator is far more intriguing, with a bit of a Freudian undercurrent.

Then there’s Sailor’s unlikely friendship with an old Indian, known as Don Jose but christened Pancho Villa by Sailor, who runs the ancient hand-cranked merry-go-round at the Fiesta, and who tries to each Sailor about patience and acceptance. And lastly there’s Pila, a young Indian girl whose odd mix of innocence and a kind of ancient stoicism draws Sailor. There’s no hint of sexual attraction, it’s more that he reminds Sailor of the childhood he never had, being a slum kid with a brutal drunken father. He buys her a ride on the merry-go-round (hence the title).

These relationships don’t really go anywhere, but maybe that’s the point. Sailor’s life isn’t going anywhere either, although he thinks he’s on the way to being a big shot. If he could just make a genuine effort to forge a connection with Pancho or Pila, if he could ignore Mac’s tendency to preachiness and accept his help, he could be saved. He hasn’t done anything really bad yet but he has a gun in his pocket and a heart full of anger and hate towards the Senator, a dangerous combination.

Ride the Pink Horse was one of several of Hughes’ novels to be made into notable film noirs, the best known being possibly In a Lonely Place.
Posted by dfordoom at 11:34 PM