Sax Rohmer’s The Slaves of Sumuru 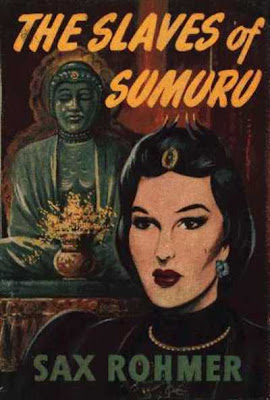 Sumuru and her organisation are dedicated to the elimination of ugliness and violence from the world. Their dream is a world of beauty, run by beautiful women. Their methods are ingenious and ruthless, but mostly non-violent. In this second instalment Sumuru, referred to by her followers in terms of awe as Our Lady, has switched the focus of her activities from Europe to New York. From her headquarters in one of New York’s tallest skyscrapers (a headquarters fitted out like an eastern palace, complete with a swimming pool for her pet barracuda) Sumuru is recruiting wealthy American women to assist in her plans to extend her private empire. It’s up to Drake Roscoe, square-jawed American secret service operative, and his friend McKeigh, an English newspaper reporter, to thwart her plans.

What makes the Sumuru novels interesting is Rohmer’s fairly sympathetic portrayal of Sumuru. She gets to explain her philosophy, and her contention that a world run by men has been a world of endless horror, violence, corruption and ugliness is hard to refute! Not only is she not especially evil, she’s also clearly far more intelligent than her adversaries. Rohmer’s admiration for Sumuru is obvious. She may be, in theory, the villain, but she’s a remarkably attractive villain.

Rohmer’s style is outrageously pulpy, but it’s enormous fun. The Sumuru novels are somewhat unusual and wildly entertaining pulp fiction, and I’m thoroughly enjoying them.
Posted by dfordoom at 6:01 AM