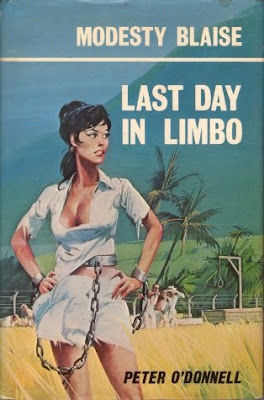 Modesty Blaise: Last Day In Limbo, published in 1976, was the eighth of the Modesty Blaise novels written by Peter O’Donnell, and it wasn’t at all what I expected.

Modesty Blaise started life as a comic-strip (created by O’Donnell) in 1963. She later appeared as a character in films, novels and graphic novels. The comic-strip was hugely popular in Britain but encountered some problems in the US due to nudity and sexual content.

I suppose (not being familiar with the comics) I expected Modesty to be simply a female James Bond but in keeping with the comic-strip origins of the character Last Day In Limbo is much stranger and more offbeat than that. Modesty and her sidekick Willie Garvin have a friend with paranormal powers who helps them out occasionally, and they also call on the services of Lucifer. Lucifer is a madman in a lunatic asylum who believes he’s the Devil himself. More than that, he has strong precognitive abilities. The result is a kind of spy/paranormal thriller/crime thriller crossover.

The plot is certainly delightfully loopy. A Central American billionaire of American Indian descent has an aunt who is totally bonkers. Aunt Benita has a grudge against white folks, having gone through some bad experiences in her childhood. She wants revenge. The billionaire, Paxero, loves his aunt so he builds Limbo for her. Limbo is a slave plantation in the middle of the Guatemalan jungle. To provide the necessary slaves The slaves are rich white people kidnapped by Paxero. This makes Ant Benita very happy until one day Paxero makes a mistake. He sends two professional killers to kidnap a Englishwoman on holiday in the United States. The Englishwoman turns out to be Modesty Blaise and she has little difficulty in killing her would-be kidnappers.

Modesty doesn’t know what’s behind this kidnapping attempt but the discovery of a watch leads her to believe than an old friend and ex-lover of hers, Danny Chavasse, is still alive. He had disappeared several years earlier. There’s a sub-plot involving another British female spy, Maude Tiller (Modesty herself is a former crime boss who nows works for British Intelligence). Eventually Modesty and Willie start to put the pieces of the puzzle together but beating Paxero will require Modesty to allow herself to be snatched and taken to Limbo.

Modesty is really a descendant of Leslie Charteris’s Simon Templar. The Saint was also a gangster who reformed and took up the fight against evil, and like Modesty he remained a slightly morally ambiguous character. And like Modesty he could also be quite ruthless. Modesty has no problem with the idea of killing people if she thinks it’s necessary.

That slight degree of morally ambiguity undoubtedly helped the success of the comics and novels back in the 60s and 70s. Also unquestionably contributing to that success was a reasonable helping of sleaze. Modesty finds some ingenious hiding places for some of her small portable gadgets, and there’s a definite element of kinkiness

It’s a thoroughly enjoyable read and the comic-strip elements give it a distinctive flavour compared to other thrillers of that era. Modesty Blaise is worth a look.
Posted by dfordoom at 1:47 AM