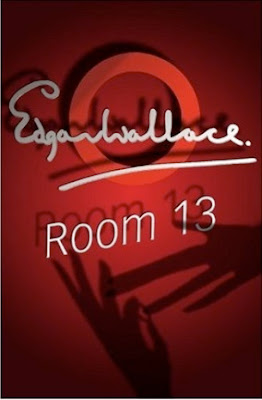 With Room 13 in 1924 Edgar Wallace introduced readers to Mr J. G. Reeder, one of the least glamorous of all fictional detectives.

Mr J. G. Reeder is neither a police detective nor an amateur crime-fighter, nor is he a private detective. In fact he’s employed by the Bank of England, and acts as a kind of consultant to Scotland Yard. He’s a shabby rather timid little man in his 60s, and even the thought of handling firearms appalls him. He’s hesitant and vague in manner and sees slightly dotty. He also has one of the sharpest brains in the country and an encyclopedic knowledge of criminals and crime. British prisons contain many wrong-doers who made the mistake of not taking Mr J. G. Reeder seriously.

There are in fact two heroes in this book, the other being a certain Captain Johnny Gray. Johnny is a gentleman, and he’s also a criminal. He’s serving a sentence at Dartmoor Prison for some rather shady dealings on the racetrack. He keeps going by thinking of the girl he hopes to marry. She’s the daughter of retired bank robber Peter Kane, although she has no idea of her father’s villainous past. Johnny is devastated when he received the news that the lovely Marney is to marry a Canadian officer, and even more upset when upon his release from prison he discovers that this Canadian officer is neither an officer, nor a gentleman, nor a Canadian.

There is a dastardly plot afoot, and it involves both a vast counterfeiting ring and an old criminal’s quest for revenge on the man he believes betrayed him to the police many years earlier.

Edgar Wallace is a curious figure in the history of crime fiction. His first novel was published in 1905 so he’s chronologically intermediate between the classic Victorian and Edwardian detective fiction of Conan Doyle and his imitators on the one hand and the “golden age” crime writers of the 20s and 30s but his work doesn’t feel like either. Wallace is at the more pulpy end of the spectrum so far as British crime writing is concerned, closer to the two-fisted action of the Sexton Blake stories than to the intellectual pleasures of Sherlock Holmes.

Wallace also in some ways anticipates the American hardboiled school. Wallace immerses the reader in the twilight world of the criminal, he delights in the criminal jargon, and he revels in the sordidness and violence of the underworld. There’s also a relatively sympathetic treatment of at least some of the criminals and Wallace is not obsessive about ensuring that every lawbreaker ends up behind bars.

Most all though Wallace is always an entertaining writer and in Mr J. G. Reeder he has created a memorable and rather likeable crime-solver.

The Wordsworth Editions paperback The Casefiles of Mr J. G. Reeder includes two novels and a collection of short stories all featuring the mild-mannered but shrewd Mr Reeder.
Posted by dfordoom at 1:33 PM