The Navigators of Space, by J.-H. Rosny Aîné 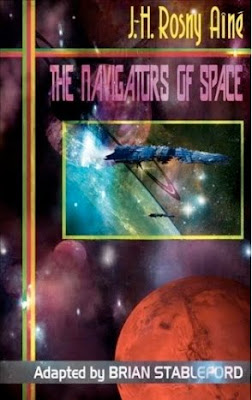 The Navigators of Space is the first of a series of volumes from Black Coat Press collecting all of the science fiction of J.-H. Rosny Aîné, a now forgotten French pioneer of the genre.

While he has been celebrated as a French version of H. G. Wells his work actually has almost nothing in common with that of the great British science fiction writers of that era such as Wells and Conan Doyle. Rosny’s work is much much weirder. In fact the stories in this first volume rank among the strangest science fiction ever written. Some of the stories, notably The Sceptical Legend, are more like bizarre esoteric philosophical essays. Most have very little in the way of conventional plotting.

What they do display is a prodigious imagination. Rosny was decades ahead of his contemporaries in pushing the boundaries of science fiction. The greatest strength of these tales is their depiction of alien life forms as something truly and bizarrely alien, so different from known life forms as to be almost incomprehensible. Interestingly enough the aliens are not always actual aliens - Another World deals with a boy who is simply born very very different, so different that his senses are quite unlike ours and he is in contact with a strange parallel universe that exists in the same space as our world.

Other stories, like The Death of the Earth and The Navigators of Space are perhaps closer to what we usually think of as science fiction but they still have a very marked edge of weirdness. The Death of the Earth portrays the human race facing extinction as the earth’s water disappears due to violent seismic activity while The Navigators of Space deals with a space expedition that finds life on Mars, but it’s definitely not life as we know it.

There are some strong common threads uniting thee stories. There’s the notion of other universes existing alongside our own, almost an early version of the multiverse concept. And there’s the idea of life forms based on the mineral world and others based on pure energy.

As with the other Black Coat Press editions translated by Brian Stableford there’s a lengthy and highly informative introduction plus an afterword. Stableford admits that some of Rosny’s stories are heavy going with perhaps an excessive degree of metaphysical speculation but believes that the sheer scope of the author’s imagination and the quirkiness and originality of the ideas are sufficient compensation It’s a judgment I’m inclined to agree with.

Definitely worth checking out if you like your science fiction with extra weirdness, or for anyone with an interest in late 19th/early 20th century scientific romances.
Posted by dfordoom at 9:22 PM