Panic in Paris, by Jules Lermina 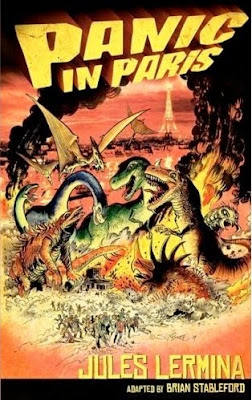 Jules Lermina’s Panic in Paris (L'Effrayante Aventure) was originally published in serial form in 1910 and in book form in 1913. It’s a scientific romance but with a much more light-hearted tone than most such tales.

Lermina (1839-1915) had strong socialist political views that had got him into a certain amount of trouble over the years but by the latter years of the 19th century he was concentrating more on trying to produce commercially successful books than on political activism. More interestingly Lermina was closely associated with the decadent movement in literature and was heavily involved in the occult, being a member of the French branch of the Order of the Golden Dawn as well as several Rosicrucian groups.

The book borrows heavily from Edward Bulwer-Lytton's The Coming Race, and of course Bulwer-Lytton was also a devotee of esoteric cults such as Rosicrucianism.

You might expect an author with such a background to take a very serious approach to writing but in fact Panic in Paris could best be described as a madcap tongue-in-cheek romp.

A body is found impaled on a fence in the middle of Paris. A visiting English detective rather improbably named Inspector Bobby identifies the body as belonging to a disreputable boxer named Coxward. The French police sieze on this eagerly as the only real clue they have to this mysterious death but both they and the English detective are highly embarrassed when a newspaper reveals that the said Coxward was in London three hours before the corpse was discovered so the corpse cannot possibly be Coxward’s. But Bobby has no doubt about his identification of the unfortunate pugilist.

The case is taken up with enthusiasm by two rival newspapers, both taking diametrically opposed views. Events take on an even stranger complexion when the trail leads both Inspector Bobby and a reporter named Labergère to an eccentric English inventor, Sir Athel Random. Sir Athel has discovered a new element with powers even greater than that of radium. He has named it vrilium. It is nothing less than the immensely powerful substance vril described in Bulwer-Lytton's The Coming Race. He has used this immense power to construct a helicopter capable of flying from London to Paris in 45 minutes.

You might wonder what on earth this has to do with deceased British prize-fighters but it is in fact the key to unlocking the mystery, but the plot has more bizarre twists in store, including the dinosaur threat to western civilisation.

Nothing in the plot makes any sense but it’s all splendid silly fun. Translator Brian Stableford describes it (fairly accurately) as being closer in feel to 1950s Japanese monster movies than to the more sober scientific romances of Lermina’s contemporaries in Britain such as H. G. Wells and Sir Arthur Conan Doyle.

The Black Coat Press edition also includes an 1890 novella by Lermina called The Elixir Of Life (L'Élixir de Vie). This is a more serious story and it’s actually an effectively chilling combination of gothic horror and science fiction. Lermina seemed to have a knack for using topical subjects (such as the discovery of radioactivity or in this case mesmerism) as a key ingredient for producing highly diverting and imaginative stories. It’s actually a much more effective tale than Panic in Paris.

Lermina’s work is not going to be to everybody’s taste but if you enjoy offbeat early science fiction there’s plenty of enjoyment to be had.
Posted by dfordoom at 3:48 AM