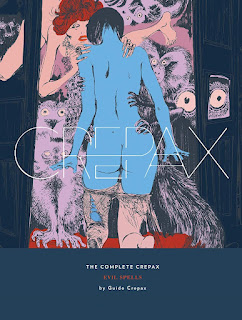 Evil Spells is a massive volume containing some of Guido Crepax’s most famous comics, in English translation.

They’re also unfortunately very very difficult to get hold of in English translations, which means that sadly my exposure to them has been severely limited. The Italian crime and horror fumetti of the 60s are almost impossible to find in English-friendly versions.

The good news is that Fantagraphics have published most of Crepax’s work, in English translations, in a series of beautifully presented hardcover editions. The bad news is that they’re going out of print at a frightening pace.

Crepax started writing comics as a child and by the beginning of the 60s he was already starting to establish his reputation. That reputation had really taken off by the end of the 60s.

Sadly the positive view he took of female sexuality did not protect him from the ire of feminist puritans.

Evil Spells includes his best-known work, the Baba Yaga cycle. This details the epic struggle between Crepax’s most famous heroine, Valentina, and the witch Baba Yaga. Valentina is a sexy glamorous photographer who manages to get herself involved in all kinds of adventures. Making her a photographer was very much in tune with the zeitgeist of the 60s, the decade of the photographer as superstar. The Baba Yaga cycle gets seriously weird but it’s delirious and intoxicating.

This volume also contains several of Crepax’s literary adaptations. His choice of works to adapt was sometimes obvious, sometimes surprising and eccentric. Spread over a period of twenty years he adapted the three famous detective stories of Edgar Allan Poe. Adapting Poe was no great surprise, but choosing his detective stories was odd. They’re obviously quite plot-driven, which doesn’t really suit Crepax’s free-wheeling style. His attempts to inject some eroticism into the stories don’t quite work.

Crepax’s adaptation of the 1898 Henry James novella The Turn of the Screw is even better. It was clearly a story dealing with sexual repression, but dealing with the subject in a very repressed late Victorian way. Crepax moves the action to the 1920s, offering the opportunity for some exquisite Art Deco images. And Crepax confronts the element of sexual repression head on.

Guido Crepax revolutionised comics, not just thematically but stylistically. If you like the idea of comic books for grown-ups and you’re OK with lots of eroticism then he’s definitely your guy. Very highly recommended.

One other European comic that is available in English is Jean-Claude Forest's Barbarella and if you haven’t read it, buy a copy right now. It’s simply wonderful.