James Eastwood’s Come Die With Me 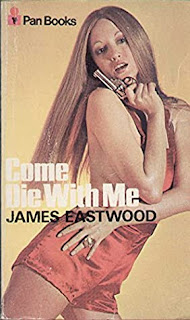 Come Die With Me, published in 1969, was the last of James Eastwood’s three Anna Zordan spy thrillers. It appears to have also appeared under the title Diamonds Are Deadly.

I know pretty much zero about James Eastwood. I believe he was born in 1918 and I’m moderately sure he was English. There was a film and TV scriptwriter named James Eastwood who produced scripts for some very interesting movies (Devil Girl from Mars, Urge To Kill, The Counterfeit Plan) but I’m not even sure it’s the same James Eastwood. The dates seem to line up. It’s also interesting that the scriptwriter seems to have stopped writing scripts in 1966 and the novelist wrote the last Anna Zordan book in 1969. He may have died or given up writing at the end of the 60s. The fact that one of the key characters in this novel is a TV scriptwriter would seem to be the final piece of evidence suggesting that the two writers were one and the same man.

Come Die With Me is set in Britain and the nation is facing a crisis. Civil unrest, riots, industrial sabotage, that sort of thing. Then the Prime Minister is assassinated and it becomes fairly obvious that there’s some sort of conspiracy at work.

The odd thing is that not long before these events a TV production company was planning a thirteen-episode serial dealing with similar events. The government refused to allow the serial to be produced. The parallels between the events in the TV scripts and the real-life events seem a bit too striking to be coincidental. The British counter-espionage service is keen to have a quiet word with the scriptwriter (a chap named Sandy McTaggart). But he’s vanished. He’s left the country.

Sarratt is the British counter-intelligence chief who is going to have to find that missing scriptwriter. Somehow McTaggart will have to be persuaded to return to Britain. It’s obviously a job for a woman - if you want to persuade a man to do something he doesn’t want to do then the lure of sex is usually the nest bait. Sarratt has just the right woman in mind for the job. Anna Zordan. If the lure of sex with Anna doesn’t work then McTaggart is just not human. 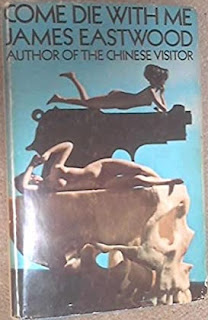 Anna finds McTaggart easily enough. He’s in Switzerland on his way to Italy. Getting his attention isn’t difficult. Anna knows how to get a man’s attention. But then things start to become a bit puzzling for her. McTaggart seems reluctant to sleep with her. Anna has dealt with all sorts of situations in her career as a spy but this is something totally new to her. No man has ever turned down the chance to sleep with her.

And then he wants to marry her.

She figures that this guy has a few problems. Problems with women, problems with sex. It occurs to her that he might be kinky. That doesn’t bother her. Anna is a broadminded girl. Very broadminded.

Before being assigned to this latest case Anna had been tracking a man named Hartley, a young British sales whizz kid of doubtful loyalty. And in the course of the McTaggart case Hartley turns up. It could be a coincidence but it probably isn’t.

Anna ends up getting involved emotionally with McTaggart. They end up on a tiny Mediterranean island. There’s another woman involved. Her name is Gloria and she’s one dangerous female. There’s a diabolical criminal mastermind as well. There’s action on land, at sea and under the sea. The violence is low-key but there’s a fair amount of it.

There’s quite a bit of sex. It’s not even moderately explicit but it is perverse. There’s psychological and emotional perversity as well. The story does in fact have a number of interesting emotional twists and emotional conflicts. Sexual conflicts are also important drivers of the plot. This is a sexy spy story in which the sex is not just something thrown in to spice things up.

Anna is a glamorous and efficient spy, apart from a tendency on occasions to let her emotions get the upper hand. She’s a trained killer and she’s more than willing to kill but she’s not especially ruthless. Killing is just a necessary part of the job. She doesn’t derive any pleasure from it.

Sex is also a necessary part of the job but that’s something Anna really does enjoy. She enjoys sex whether she’s doing it for professional reasons or for purely recreational purposes. And she’s very very good at it.

The plot, with fiction being turned into reality, is quite clever. The characters are quirky and perverse. Eastwood’s prose is very serviceable. The book certainly belongs in the lighthearted action/adventure spy story sub-genre rather than the gritty realistic sub-genre.

All in all this is a very decent spy thriller and it’s highly recommended.
Posted by dfordoom at 5:30 PM