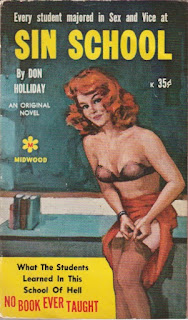 Sin School is a 1959 sleaze novel by Don Holliday. Don Holliday was actually a house name used by various writers for Midwood Books. This book was apparently by Hal Dresner.

Dale Lorring has just arrived in the city of Sutton to take up a position as a teacher at Sutton High School. It’s the most expensive school in the country and the job pays extremely well. For the 24-year-old Lorring it seemed like a great opportunity. It soon turns into a nightmare.

Sutton is a very rich city. And that’s the problem. Lots of very rich people. They live in fancy houses, drive big cars and wear expensive clothes. And they have the morals of pigs. Their children are even worse - not just spoilt arrogant brats but vicious. Sutton High School is a very exclusive school but it’s the school from Hell.

The teachers are downtrodden and cynical. They stay on as long as they can stand it because the money is good.

Worst of all are the Esquires. They’re an unofficial fraternity. They’re rich young hoodlums.

Lorring realises this is no ordinary high school when he happens to glance into a storeroom where two of the students are having sex.

The one bright spot for Lorring is Karen. She’s the school librarian. She’s young and sweet and pretty. She loves Dale Lorring and he loves her. But it’s not all smooth sailing. They can’t have sex because she’s frigid. She dislikes sex so much that she won’t even let Dale touch her.

Dale is not the only teacher with troubles. Bickell is the middle-aged shop teacher. He has a cute French wife but she’s a lesbian. Bickell isn’t coping very well with that.

Lorring isn’t happy at the school. He wants something down about the Esquires but he’s not going to get any help from Nash, the principal. Nash is too scared of upsetting those rich parents. The fact that Dale is not getting any sex from Karen doesn’t help his outlook on life.

Not that there’s any need to go without sex in Sutton. There’s Roxanne, one of the teachers. She’s a nymphomaniac and she’s already picked Dale as a future bed partner. And then there are the mothers of the students. Like Barbara Ann’s mother. She’s rich and powerful and makes it clear to Dale if he doesn’t sleep with her she’ll make sure he loses his job. So Dale sleeps with her.

Lorring’s dislike for the Esquires grows stronger and stronger (and he particularly detests their leader, Burke) but he knows that it would be futile to take them on openly. His idea is to win their confidence in the hope of being on the spot when they do something really bad, something do illegal that even their rich daddies won’t be able to cover up for them. Unfortunately Lorring’s plan is pretty vague. It doesn’t amount to much more than hoping the Esquires will make a mistake.

There’s a lot of sex in this book but when it comes to describing the sex it’s very very tame. On the other hand the book does succeed in creating a palpable atmosphere of corruption, sleaze and sin. There’s also a fair amount of violence. The Esquires play rough. There’s a convincing atmosphere of menace as well, and we have a sense that this situation is not going to end well.

A lot of sleaze novels included strong noir fiction elements and although it might be a bit of a stretch you could just about describe this book as noir, or at least slightly noirish.

While it’s typical of sleaze fiction in relying on the shock value of sex what really makes this book dirty and grimy and oppressive is not the sex but the violence and sadism of the Esquires, and the corruption of the city.

Sin School is in the Peyton Place tradition of exposés of the hypocrisy and phoney respectability of small town life. It works pretty well and it’s entertaining. Highly recommended.