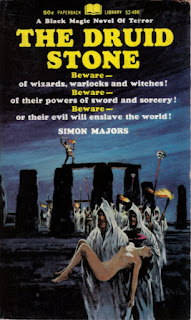 The Druid Stone is a 1967 novel of black magic by Gardner Francis Fox, using the pseudonym Simon Majors. It was published in 1967.

Brian Creoghan is in his mid-thirties but he’s packed a lot of action into his life. That life has been spent roaming the globe in search of adventure, and perhaps (we will come to suspect) in search of something more. His globe-trotting has not taken him to places like Paris and Rome. He’s always been interested in more remote and exotic places. His journeyings have brought him into contact with strange religions, esoteric sects, secret rites and other aspects of what could be described as the weird and the occult.

Now he’s settled down in a farmhouse in New Hampshire. The first sign that his adventuring days might not be over is the patch of blackness in the woods. It just didn’t look natural. That female voice he heard was a bit mysterious as well.

He gets an invitation to dinner with his new neighbours. Moira and Ugony MacArt are brother and sister. Moira is disturbingly alluring. Ugony has spent his life investigating the occult and he has amassed a collection of ritual objects. His interest in the subject is intense but whether it’s healthy remains to be seen. Now he wants Brian to join him in a little experiment. All Brian has to do is to place his hands on a druid stone.

At which point everything changes.

At first it’s reasonable to assume that we’re going to get an occult thriller. This was a hugely popular genre at the time with Dennis Wheatley’s Black Magic books being massive sellers. But before The Druid Stone actually gets underway we’re offered a tantalising hint that this story might be more science fictional than we expect.

And when Brian Creoghan touches that druid stone we find that the book has become a sword-and-sorcery tale. Brian Creoghan is no longer Brian Creoghan. He’s a great warrior named Kalgorrn, he’s in another land which doesn’t seem to be Earth at all, and he’s a different person. Or rather he’s now two people in the same body. And the action starts to really kick in.

He’s now a warrior, a lord whose lands were stolen from him by an evil sorcerer. As a result of a spell he’s been sleeping. Possibly for centuries. But now he’s found his lover, the beautiful witch-woman Red Fann, and they have a quest for revenge to undertake. And lots of terrifying monsters to battle.

To now assume that this is going to be a straightforward sword-and-sorcery adventure would however be a mistake. The author has more tricks up his sleeve.

The story continually switches back and forth between the ordinary world of the present day and the fantastic magical world. Soon Brian Geoghan is no longer sure if he really is Brian Geoghan or if he’s the hero Kalgorrn. He has other complications to worry about. Kalgorrn is in love with Red Fann but Brian is falling in love with Moira. These two women are liable to be a bit unhappy about sharing him.

He also realises that the two worlds he inhabits are liked in some way. What happens in one world could have consequences in the other. In fact the fate of both worlds could hang in the balance. And there’s still that science fiction element lurking in the background.

There’s also the problem that he’s starting to wonder exactly what Ugony MacArt is up to. There was a murder a while back and while Brian is sure that Ugony is not capable of being involved in murder the locals have strong suspicions that Ugony is the murder. So we get a mystery sub-plot as well.

Fox had a real knack for producing thoroughly enjoyable fast-paced pulp tales in multiple genres. He wrote both the Cherry Delight series of sexy sleazy spy/crime thrillers (beginning with The Italian Connection) and the equally entertaining The Lady from L.U.S.T. sexy spy thrillers (beginning with Lust, Be a Lady Tonight). There is however no sleaze at all in The Druid Stone.

The Druid Stone is a very entertaining read. Highly recommended.
Posted by dfordoom at 7:05 AM