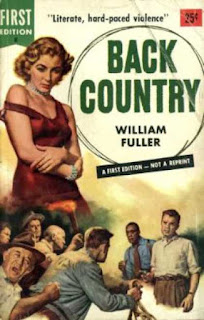 William Fuller (1913-1982) had been a successful writer for the slicks when in 1954 he suddenly switched to churning out paperback original hardboiled crime thrillers. Back Country was his first novel. I guess you could call it backwoods noir.

The narrator, Brad Dolan, is in his early thirties and he’s had an adventurous life, and now he feels let down by life. He’s embittered by his experiences on both the Second World War and the Korean War and even more embittered about his wife’s unfaithfulness (she’s now his ex-wife).

He decides to head for Florida. He needs some sunshine. His car breaks down in a small town in Carter County, he decides he needs a drink but it’s a dry county so he has to go out of town. He gets into a fight in a gambling joint. The fight is over a woman. Getting into fights over women is the story of Dolan’s life. He wakes up in a cell and he figures he’s in real trouble this time. Surprisingly though he is released, and offered a job by Rand Ringo. Rand Ringo runs Carter County. He’s a shady businessman, a racketeer and a crooked political operator. Dolan accepts the job.

That’s the novel’s first misstep. Dolan is at heart a self-righteous Boy Scout. It doesn’t make sense that he’d take such a job. He tries to tell himself that he’s just out for what he can get but his self-righteousness is much too obvious and of course right from the word go he’s riddled with guilt.

Dolan gets wind of some plotting against Ringo on the part of the madam of one of Ringo’s brothel and the crooked redneck sheriff. Dolan figures he can use this information.

So far so good. We have a setup which promises some noir melodrama, with a self-pitying loser hero who is determined to get himself into the deepest trouble he can find.

And then Fuller starts on the politics. And he doesn’t let up. I’m prepared to believe that the guy was well-meaning and sincere in his beliefs and maybe he thought he was saying things that needed to be said in 1954. In 1954 he was probably right. Maybe in 1954 readers would have been interested. But reading the novel today it gets really tiresome to be bludgeoned about the head with the hot-button political issues of 1954. That’s the problem with political novels - they age very very badly.

Dolan is presumably meant to be a guy that we’re going to admire but I found him to be mightily irritating. He’s just too much of a Boy Scout looking for a crusade. His self-pity also gets old real fast. Given the background that is sketched in for the character he should be an interesting colourful guy but he isn’t.

The other characters in the novel fall into two categories - those who are brave and noble and honourable and those who are cardboard cut-out evil villains.

The plot is just a bit too predictable and much too contrived. Everything is secondary to the political message. And it’s all much too heavy-handed and obvious.

There’s a fair amount of violence and a bit of sleaze.

I suspect that the problem with this book is that Fuller’s background was in the slick magazines. I don’t think he really understood pulp fiction. The book reads as if he’s slumming. He’d prefer to be writing “proper” fiction. He just doesn’t get the tone right.

This is overall a pretty terrible book. It just doesn’t work. I really can’t recommend it at all.
Stark House have reprinted this book in their Black Gat Books line.
Posted by dfordoom at 6:35 AM