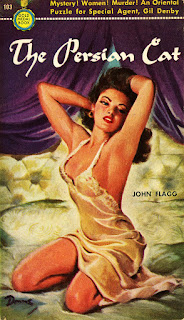 This was an interesting transitionary period for spy fiction which at this time was dominated by writers like Victor Canning. Within few years Ian Fleming would change the rules of the game, upping the ante when it came to sex, violence and glamour. 1950 was also a time when the Cold War had not yet come to dominate the world of the spy novel. In 1950 the bad guys were still the Nazis. The war was over but that made no difference. Nazis were still the favoured bad guys in both spy novels and spy movies.

The Persian Cat falls into that category - a story in which the Second World War looms over everything.

The novel is set in the late 1940s. Gil Denby is an American, presumably in his thirties. He did cloak-and-dagger work during the war but his experiences have left him cynical and bitter. Much of the bitterness is over Dorothy. He has daydreams about killing her.

Denby is now for sale to the highest bidder. In this case that’s the French. They want him to bait a trap for a woman named Claire Fayne. They believe she was responsible for the deaths of several members of the Resistance (the French Resistance was an absolute obsession with thriller writers at this time). His job is to persuade her to enter French territory where she can be arrested. It may be necessary for him to seduce her. They are in fact setting him up as the male equivalent of a honey trap.

Claire Fayne is living in Teheran. She is the mistress of a man Edmund Marlan. Marlan has extensive business interests, none of them particularly honest. He was a wartime profiteer. He is ageing, clever and very dangerous.

A female French agent named Gaby will be assisting Denby in Teheran. She has already been sharing his bed.

Right from the start Denby finds himself out of his depth. He is followed everywhere but he has no idea by whom. It’s likely that a number of persons and organisations have taken a keen interest in his presence in Iran. The British Secret Service, in the person of a man named Berkeley, is definitely interested. Denby thought he would be the one doing the manipulating but he finds that he is dancing to the tune of a number of dangerous puppet masters. And he starts to think that his cover (he’s supposed to be buying rugs for a Chicago department store) might be very threadbare indeed. 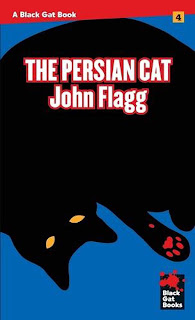 In fact it’s possible that everybody in Teheran knows more about what’s going on than Gil Denby.

Denby is doing the job for money but he has his own reasons for hating women like Claire Fayne. Those reasons have to do with Dorothy.

This novel offers as much paranoia as any spy fiction fan could hope for. Denby doesn’t know whom to trust. Maybe everybody is out to get him.

Gil Denby is no James Bond. He’s a characters straight out of American hardboiled/noir fiction. He’s a cynical loser with a chip on his shoulder. He hasn’t lost all his idealism but what little remains is sadly frayed around the edges. He doesn’t trust women. When he does trust a woman, or when he does regain some of his idealism, life comes along and kicks him in the guts.

I have no idea how authentic or inauthentic the Teheran setting is but it doesn’t matter. This is not the real world, it’s spy fiction world. However inaccurate it might be the setting provides a perfect background for a story about a drifter like Denby and it gives the book the touch of exoticism that readers at that time craved.

This is a story of betrayals in the past and betrayals in the present and Denby starts to think he may become guilty of betrayal as well, or at least complicit in betrayal. Betrayals in the world of espionage can of course be personal or professional and the book tends to suggest that personal betrayals are worse. Gil Denby certainly feels that way. He’s been betrayed in love before and he really feels that there’s nothing worse. And when he thinks he might betray love he has to do some serious re-evaluating.

The plot twists are quite satisfactory. There’s some effective atmosphere and it’s all pretty entertaining. I enjoyed it enough to go looking for more of Flagg’s spy novels. Stark House have re-issued quite a few of his books so availability is not an issue. The Persian Cat has been re-issued in their excellent Black Gat Books range. Highly recommended.