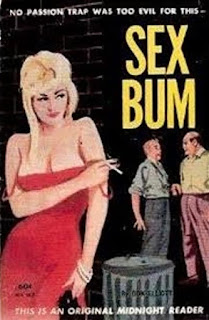 Johnny Price is nineteen and he’s big and muscly although perhaps not too bright. He is however sly and cunning. And he’s ambitious. He makes fifty dollars a week as a delivery boy for a grocery store but he intends to become a big shot. He wants to work for the Syndicate. That way he’ll get to drive around in a Cadillac with tail fins and have lots of sophisticated big city women throwing themselves at him. He figures his chance has come when he manages to help out a couple of mobsters.

They take him on as a chauffeur. He moves out of his aunt’s house and dumps his girlfriend Beth. The job with the mobsters is a live-in job.

They offer him ninety a week plus fringe benefits. He gets a taste of the fringe benefits right away - he gets a free tumble with Marilyn, a gorgeous and very expensive high-class whore.

He manages to impress Marilyn. One thing Johnny is good at is sex.

Johnny is a young man rising fast in the Syndicate, and he intends to rise even faster. He has money in the bank and a fancy car. And he has women. They’re high-class prostitutes, and they’re the types of women Johnny likes. They’re very imaginative in bed. There are two in particular, Ellie and Marie. Marie is Mike Rizzo’s girl. Mike Rizzo is a Syndicate king pin. Sleeping with Mike Rizzo’s girl is a bit foolish but Johnny is supremely confident that he can get away with anything, and Marie assures him there’s no risk.

Johnny works for Lurton and Kloss, who run the Syndicate’s operation in his area. He’s their protégé. To Johnny they’re an obstacle. He figures he can handle their job. He just has to find a way to get them out of the way and he has a plan to do just that.

This is a noir gangster novel but with lots and lots and lots of sex. As a noir novel it works quite well, with a good plot twist at the end and plenty of hardboiled atmosphere. These are ruthless gangsters and the incident with the state senator’s daughter has some real shock value.

But mostly it’s about the sex. Johnny is almost as obsessed by sex as he is with climbing to the top. And the girls, especially Ellie and Marie, provide him with every sexual thrill a nineteen-year-old could imagine and some he hadn’t even thought of. By 1963 standards the sex is described slightly more graphically than you might expect.

Johnny is interesting as a noir protagonist because of his extraordinary self-centredness. He has zero ability to put himself in someone else’s shoes. He gives no thought at all to the effect his actions might have on others. In his line of work this is a dangerous character flaw because it leads him to assume that other people will react the way he wants them to. And he has no capacity for reading other people’s emotions. If you want to survive in his industry you need to be keenly aware of how your actions affect others. You need to be able to anticipate when your actions are going to cause jealousy or bitterness or resentment because in the world of organised crime other people’s jealousy or bitterness or resentment can get you killed. If you want to manipulate people successfully you need to at least have some vague understanding of the concept of loyalty, so that you can at least pretend to be loyal to people. Johnny lacks these abilities.

He also makes assumptions about the women in his life. If Ellie and Marie tell him he’s terrific in bed he assumes that they will therefore do exactly what he wants them to do. The fact that they might have their own agendas or their own ambitions doesn’t occur to him.

This is what makes the book work as a noir thriller. Johnny is such an extreme narcissist and probably a psychopath.

But it’s the sleaze that was always going to be the book’s selling point and it delivers on that count. Silverberg’s sleaze fiction was, for its time, very sleazy. If you want sex and noir Sex Bum is recommended. The effective noirness means you don’t have to be too embarrassed about enjoying it.

Silverberg’s earlier Gang Girl is even better and is highly recommended.