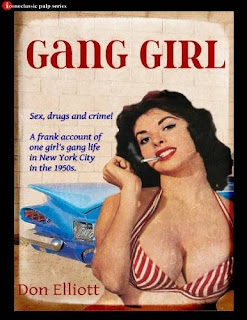 In 1958 there was a major convulsion in the science fiction world and most of the magazines on which writers relied to publish their stories ceased publication. This was a particular problem for younger writers. Writers like Robert Silverberg, who although only in his early twenties was already making a name for himself. Fortunately his pal Harlan Ellison came to the rescue, offering him a contract to write cheap paperback erotic novels for Nightstand Books. He’d have to write a couple of such novels a month which sounds daunting but Silverberg was sure he’d have no problems. And he was correct - in the next five years he churned out 150 sleaze paperbacks under the name Don Elliott.

Gang Girl was one of the earliest, appearing in 1959. It’s a juvenile delinquent potboiler and it’s violent and it’s sleazy. Of course by later standards it is in some ways incredibly tame. There’s a lot sex and it’s graphic enough to ensure the reader knows exactly what is going on, but the language is toned down enough to avoid any inconveniences, like being prosecuted for obscenity. In that respect it’s tame but in other ways it’s still quite startling in its depiction of the mindless brutality, the crazed obsession with sex and the sheer stupidity, boredom, viciousness and futility of New York juvenile gangs in the late ’50s. It’s a lot more open about the sex and violence than any mainstream novels or movies dealing with the subject.

Lora Menotti is sixteen and she’s the deb of the leader of the Scarlet Sinners but now her parents have moved to a new housing estate (all tower blocks) in an effort to get their daughter away from gang life. It doesn’t work. Lora immediately joins the gang in her new neighbourhood, the Cougars. But Lora has no intention of just joining the gang. She intends to run it. That means she’ll have to persuade the gang President, Whitey, to dump his current deb and make her his deb. As Whitey’s deb she’ll be number one girl in the gang, and he has no doubts that she’ll be the one calling the shots.

With her 39-inch bust and her body like a sex goddess she has no trouble getting men to do what she wants them to do. Getting Whitey to dump his current deb, Donna, isn’t going to be a challenge. There is however a minor problem. Whitey always likes to mark his debs to establish his ownership of them, which he does by carving his initials (with a lighted cigarette or a knife) into one of their breasts. Lora has no intention of letting any man carve his initials into one of her spectacular breasts. They’re going to be her meal ticket in the future (she has ambitions to be a call girl). So now her challenge is to maintain her position in the gang without submitting to such treatment.

Lora isn’t too worried. She is utterly ruthless and her mastery of the art of manipulation is something to behold.

Lora’s machinations aren’t just for the purposes of gaining advantages for herself. She is very turned on by violence - nothing gets her more excited than seeing someone being beaten up, except perhaps seeing someone killed. If the victim is subjected to humiliation that’s even better. And it’s best of all if the victim is another woman who might be a rival. Her response to what happens to Mae (one of the debs who happens to be in Lora’s way) is incredibly chilling. Not surprisingly Lora’s arrival among the Cougars triggers a great many outbreaks of violence.

While I said earlier that this book is tame by later standards that’s not really entirely true. You won’t encounter any crude terms for male or female body parts but some of the sexual violence is hair-raising to say the least (such as a truly chilling gang rape). Some of it you just wouldn’t get away with today.

Gang Girl is obviously unashamedly trash fiction. Much of its appeal comes from that. There is however a bit more to it than that. Robert Silverberg was after all a fine writer and even when consciously churning out pulp sleaze he was unable to avoid offering some insights into some of the dark corners of the human psyche, particularly relating to sex and violence. He does try to get inside Lora’s head and what he finds there is deeply unsettling. Lora is not a good girl gone bad, she’s not a victim of circumstances, she’s not a product of a broken home or of childhood trauma. Her evil comes from within. For her the gang life simply has the effect of removing the normal social inhibitions that prevent people from acting on their most primal selfish instincts. It allowed her to shed all her sexual inhibitions very early on and she’s gradually shed all her moral inhibitions.

Perhaps if she had never joined a gang she might have been a nice girl but it seems unlikely. Being selfish and manipulative seems to be an inherent part of her personality. Her prodigious sexual appetites always seem to be inherent. Even without the gangs she would probably have been trouble.

Gang Girl delivers plenty of cheap violent sleazy pulp entertainment but there’s just enough substance there that you don’t have to feel too guilty about enjoying it. OK, you might feel a little bit guilty. There’s also enough dark subject matter to almost qualify it for noir fiction status.

Highly recommended.
Posted by dfordoom at 4:31 AM