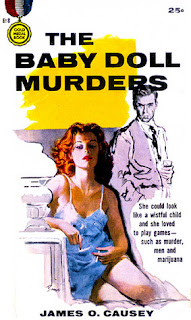 The Baby Doll Murders was James O. Causey’s second novel. It was published in 1957.

Cliff Tierney works as a dealer in Vegas, or at least that was until he got fired for losing his temper. Now Markham wants him to do a job. Tierney has reasons for not wanting to work for Markham. But Markham offers him more than money. Markham offers him a girl as well. The girl is Holly. Tierney used to be crazy about her.

The job involves a girl named Ann. Ann is blackmailing somebody, somebody who doesn’t like being blackmailed.

It has something to do with a doctor named Thaddeus Ross. Ross is also a politician. He was a moral crusader, until Markham got to him. Now he’s Markham’s man. They make plenty of dough out of the gambling but they have a very lucrative sideline as well, as slowly becomes apparent.

Tierney doesn’t know which way to jump. He hates Markham. But Holly is a complication, and Ann is a complication as well. The dead body is yet one more complication. Tierney didn’t kill the guy but suspects he may be framed for it.

What Tierney needs to do is to figure out what all these people are really up to, and whether he can trust anybody. He has to figure out that sideline that Ross and Markham have going. He has an idea what it is, it seems to be connected with a private sanatorium and with a baby born to a woman named Zoe, but he has no evidence. And Tierney is a carny. He won’t have anything to do with the police. If you’re a carny and you have a beef with someone you settle it yourself.

Of course he also has the problem of trying to stay alive.

For Tierney, and for the reader, there are two mysteries to unravel. There’s the mystery involving the sanatorium. He knows a couple of the people mixed up in that racket but any one of half a dozen other key characters could be involved directly or indirectly. Then there’s that corpse. How the guy came to be a corpse is a total mystery. There are at least half a dozen suspects. The motive is unknown - he might have been killed to keep him quiet but revenge or sex or money are also possible motives. All Tierney knows is that he didn’t do it but he’ll take the rap if he doesn’t find the killer.

Tierney also has a problem with two women, Holly and Ann. Both to some extent fit the femme fatale profile. Either one could turn out to be a good girl or a bad girl. And Tierney is emotionally entangled with both.

There are hints that the sex lives of some of the characters are not exactly healthy.

Tierney is a classic noir protagonist. He has never been a moral paragon and he has a violent temper but he’s not really evil and he clearly could find redemption. Redemption could cost him his life. Maybe he doesn’t care. He’s not overtly likeable and he’s stubborn and he makes mistakes but he’s making some effort to overcome the chaos of his life up to this point and we can’t help feeling sympathy for him.

There’s the noir atmosphere of corruption. Paloma Beach is outwardly respectable but it’s a town that lives off gambling and the city council is cowardly and corrupt. Maybe Tierney is sensible not to trust the cops.

There’s a fair amount of violence although the body count is quite low. Causey has an effortless mastery of the hardboiled noir style.

The Baby Doll Murders has mystery and suspense, it has atmosphere and style and it has a bit of sleaze. It’s definitely very entertaining. Highly recommended.

Causey's first novel Killer Take All! was published early in 1957. It's also very much worth reading. Stark House have an omnibus edition with three Causey novels including both Killer Take All! and The Baby Doll Murders. It's pretty much a must-buy for noir fans.