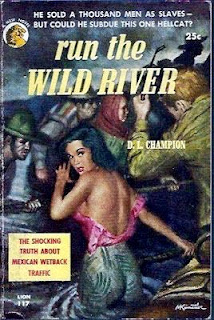 Australian-born D’Arcy Lyndon Champion (1902-1968) was raised in New York and served in the British Army in the First World War. He wrote stories for various pulp magazines. Run the Wild River was his only novel.

The hero Ackroyd (if you can call him a hero) has just been thrown out of both El Paso and Juarez on the same day. The throwing out was done by two cops, one Mexican and one Texan. They also relieve him of all his money. They dump him near Guadalupe. Things look a bit grim but or hero is used to that. He’s twenty-eight years old and a small-time crook and a born grifter. He didn’t need to end up this way. He had a good middle-class upbringing but he was disgusted by the prospect of a respectable middle-class life. He figured he’d find a racket that would provide the things that really matter in life, namely money and women. And pretty soon it seems that luck is on his side and he’s found that racket.

The racket is running illegal immigrants across the Rio Grande into Texas. Since his mother was Spanish he speaks the language fluently, which is how he’s lucked into this situation.

It’s a lucrative racket and soon Ackroyd is well established in it. It’s not just an illegal immigration racket. That’s just a part of the operation. There are lots of other things that can be smuggled across the Rio Grande.

Ackroyd does not like the idea of being a mere buck private in this criminal army. He wants to be officer. In fact he wants to be a general. The guy running the whole racket is the guy who’s going to have real money and real power and as many women as he wants. He intends to be that guy.

Ackroyd has the ambition and the ruthlessness and the drive and he’s a fairly smart guy. He is however essentially just a young punk who got lucky. He’s dealing with people who have a lot more experience in running criminal rackets and some of them are smart guys as well. Those guys are not necessarily going to be thrilled about an upstart young punk trying to take over. Ackroyd might not have the experience to deal with seasoned operators. And he’s very confident. Maybe too confident.

He finds himself a pretty Mexican whore named Maria but then Gale Graham comes along. Gale is a beautiful young American who thinks she’s a painter. Ackroyd now wants a woman with real class, not a cheap whore. But Maria is in love with him and she’s likely to cause difficulties.

Ackroyd’s rise has been swift but he intends to rise much higher. HIs problem is that he doesn’t know who the really big guys, the guys controlling the entire operation. If he wants to get to the top he first has to find out the identity of the people who are currently at the top. That proves to be quite a challenge.

There were a lot of excellent noir novels published in the 50s but there was a weakness that afflicted some of them. The authors would go overboard with the noirness. If you have a protagonist with no redeeming qualities at all, someone who is corrupt and vicious all the way through, the reader can find it difficult to care abut that protagonist’s fate. If the noir atmosphere is overdone a book might have no characters who are not corrupt and vicious all the way through, and therefore no characters about whom it is possible to care. That’s a definite problem with this novel. Ackroyd does not do a single decent thing in the course of the entire story.

A more minor weakness to this book is Champion’s over-fondness for foreshadowing. We can figure out for ourselves that Ackroyd’s over-confidence will land him in trouble and we don’t need to be told this, but we are told, and told too often.

However, having said these things, if you like your noir fiction good and sleazy and hardboiled and grimy, if you like a book in which you can smell the cheap liquor, the cheap perfume and the sweat, then you’ll be delighted by this one. Champion’s prose is solid and the plot is nicely put together.

Run the Wild River is recommended to fans of noir fiction who like their fiction very noir indeed.
Stark House Noir have reprinted Run the Wild River in a paperback edition with two other crime thrillers, Kermit Jaediker’s Tall, Dark and Dead (which I reviewed here recently) and Frederick Lorenz’s excellent The Savage Chase.
Posted by dfordoom at 6:15 PM