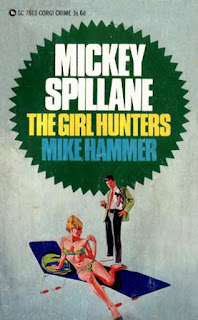 Mickey Spillane’s The Girl Hunters, the seventh of his Mike Hammer novels, was published in 1962.

Between 1947 and 1952 Mickey Spillane wrote six hugely successful Mike Hammer private eye novels, beginning with I, the Jury and ending (temporarily) with Kiss Me, Deadly. A break of ten years followed before the series resumed with The Girl Hunters.

On this particular occasion a couple of cops find Mike in the gutter. They look in his wallet, find out his name’s Mike Hammer and the name rings a bell. The older cop thinks he should let Captain Pat Chambers know.

Pat isn’t entirely pleased to see Mike. Pat despises drunks, even drunks who used to be friends. And as far as Pat is concerned he and Mike are no longer friends. As we will find out, that’s not only because Mike is a drunk. Pat buys Mike some new clothes and gets him some medical treatment, not out of friendship but because there’s one thing he needs from him. There’s a guy named Richie Cole lying in a hospital bed dying of a gunshot wound and the guy won’t talk to anybody but Hammer. Pat is sure that this guy can give him a lead on a murder case. A really big murder case. The murder of a senator. So, for just long enough to get something out of Cole, he needs Hammer.

Hammer does get something out of Cole. He gets a name. He also gets something else, something that, in an instant, transforms Hammer from a hopeless alcoholic into a professional investigator again. Cole mentions Velda. He mentions her in a way that indicates that she’s still alive.

Mike isn’t going to pass any of this on to Pat Chambers. He’s not going to pass this information on to anybody. Then a Fed named Rickerby comes to see him. What Rickerby tells him changes things.

Mike slowly realises that nothing is as it appears to be. The senator had been murdered in a burglary gone wrong. The case Velda had been working on when she was presumably killed involved a jewel theft. Richie Cole had been a jewel smuggler. The senator and Richie Cole were shot with the same gun. There seem to be tenuous connections between all these events but the real connections are so bizarre as to appear almost incredible. Even stranger, the roots of this case (or these cases) go back forty years. 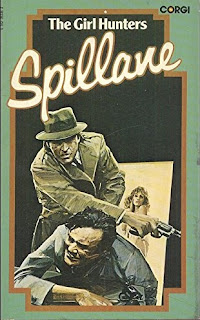 As the book progresses the plot becomes more and more over-the-top. Everything connects but in truly outlandish ways. This case is bigger than anything Mike has ever been involved in. It’s bigger than anything he could ever have imagined. To say that the plot stretches credibility is putting it mildly. But it is fun in its own way.

Some of Spillane’s perennial obsessions crop in this story, in a big way, but to reveal which obsessions would spoil the fun.

This book also adds whole new dimensions to the relationship between Mike and Velda. It’s a relationship that was always somewhat ambiguous - were they ever going to admit to being in love and get married? It also dramatically alters the dynamics between old friends Mike Hammer and Pat Chambers. It changes the way we view mIke, Velda and Pat Chambers. It’s not that they suddenly start to behave in ways that that are out of character. It’s more that Spillane has decided to go in for character development.

Hammer’s character also changes considerably, but the changes make sense. He’s seven years older. In those seven years he has almost succeeded in destroying himself. The scars are going to take a long time to heal and some might never heal. He’s lost a little of his old confidence. He’s lost a little of his enthusiasm for violence. It’s not that he’s become less violent, but he doesn’t seem to enjoy it as much. He’s lost a lot of illusions about himself, about his belief in his indestructibility and about people he thought he knew. He’s older, maybe a bit wiser and definitely a bit sadder. He’s going to have to find a way to put himself back together again, and he’s not going to be quite the same person. In the later Mike Hammer novel The Body Lovers (from 1967) you can see that some of these changes were permanent.

All this was quite a bold move on Spillane’s part, indicating that when he returned to the Mike Hammer series he didn’t want merely to rehash his earlier books.

The Girl Hunters (1963) film adaptation starred Spillane himself as Mike Hammer. And he proved to be not a bad actor!