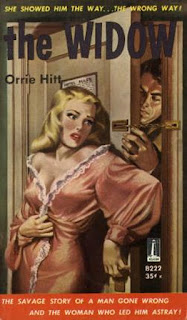 Orrie Hitt (1916-1975) was one of the many authors who made a living in the 50s and 60s writing paperpack sleaze novels. Hitt wrote of lot of those novels. The sleaze fiction of that era is actually somewhat varied. Some sleaze novels are sex melodramas, some are risqué romances, some are juvenile delinquent potboilers and many cross the line into noir fiction territory. Some of them can be regarded as the literary descendants of James M. Cain’s 1930s novels such as Double Indemnity and The Postman Always Rings Twice.

Orrie Hitt’s The Widow dates from 1959, and it has a definite James M. Cain atmosphere. Jerry Rebner was once an ordinary happily married young man with a future. That all ended when his wife was killed in an auto accident. Since then he’s been a drifter. As long as he can earn enough money to keep himself supplied with liquor and women (and the more liquor and women the better) he can stop himself from remembering. Jerry is not quite an anti-hero but he’s no hero either. He’s become a loser and his self-pity has made him selfish. He doesn’t want love from women, just sex.

Linda is married to Frank Sprague, Mrs Sprague’s son. Frank is only interested in two things - drinking beer and working on his hot rod. Linda has long since ceased to love him. She does however have her reasons for staying with him. Linda is young and beautiful and Jerry is pretty interested in her. Mostly he’s interested in her for the reason he’s interested in women in general. He wants to go to bed with her. This time however it might be just a little bit more than just sex.

Persuading Linda to go to bed with him doesn’t prove to be too difficult. The fact that she’s a married woman doesn’t bother him. In his experience the sex is always particularly good with married women, if they’re unhappily married. Maybe there was a time when Jerry might have been bothered by the morality of bedding married women but those days are long gone. Since his wife was killed he just lives for immediate sensual gratification.

There is a complication. Norma Sparks, the daughter of his former employer. Norma is even more gorgeous than Linda. Norma is a model. A nude model. Jerry has seen the pictures of her in a men’s magazine. He likes what he saw. He wants some of it. Trying to get involved with Norma when he’s already involved with Linda isn’t a very smart thing to do but after seeing those nude pictures he doesn’t care.

There’s a much bigger complication. Sex can be a huge motivating factor but the lure of money can be even stronger. And there’s a lot of money which seems to be there for the taking.

Sleaze novels can be very noirish but since they’re not quite pure noir you can never be sure just how dark they’re going to get. You might get a happy ending or a tragic ending. At times these novels seem like they’re heading towards crime fiction territory but they don’t always go all the way in that direction. But sometimes they do. I’m certainly not going to give you any hints as to where this one ends up.

As is the case with most 1950s/early 1960s sleaze fiction there’s no graphic sex whatsoever. We know the characters are having sex but there are no descriptions of the sexual acts at all. The sleaze factor comes from the idea that people might actually have recreational sex, and that married women might have sex with men other than their husbands.

The noir atmosphere is stronger. Jerry is a guy entirely driven by his desire for sex and booze. He cannot think ahead at all. Since his wife’s death his horizons are limited to the next thirty seconds. His judgment is atrocious and he assumes that everyone else approaches life the way he approaches it. He assumes that all women are as driven by lust as he is. Now, for the first time in years, he has to consider that a woman might have needs that cannot be satisfied in the bedroom but this glimmer of awakening just makes his judgment even more questionable.

The Widow has been re-issued by Stark House in their series of noir reprints, in an edition that also includes another Orrie Hitt sleaze classic, Wayward Girl (which is a much sleazier juvenile delinquent melodrama that also has a definite noir vibe).

There’s certainly a very sleazy desperate atmosphere to The Widow. It’s likely to appeal more to noir fans than to sleaze fans. Recommended.
Posted by dfordoom at 4:41 PM