David Wright O’Brien's Once is Enough 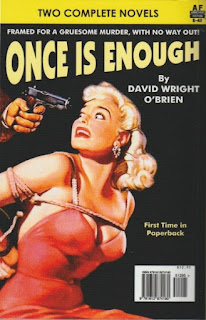 Once is Enough is a 1943 crime novella (which could at a stretch almost qualify as a short novel) by David Wright O’Brien, an American pulp author whose obscurity has a lot to do with his very early death - he was killed in action in World War 2 at the age of twenty-six. He seems to have written mostly science fiction.

The protagonist of Once is Enough, Richard Thane, wakes up feeling very sorry for himself. He feels terrible and he has a very nasty wound on his head. He is clutching a gun. A few feet away is a dead body. The corpse is holding a bloodied fire poker. Thane hasn’t got a clue where he is. He’s in an apartment he’s never seen before. He doesn’t know how he got there. He has no idea of the identity of the dead guy.

Thane is a lawyer and there’s one thing he is sure of. There’s enough evidence here for the police to charge him with murder, and they would almost certainly get a conviction.

Thane needs to get out of this apartment and he needs to figure out what has happened. First he needs to telephone his wife. He doesn’t get any answer. Where on earth could Lynn be? It’s the middle of the night.

He finally remembers going into a bar the night before. The barkeep remembers him. What the barkeep tells him makes the whole situation even more incomprehensible. What’s even more puzzling is that he knows he left home the previous day with twenty bucks in his wallet. Now there’s $2,500 in his wallet.

It’s a reasonable supposition that someone in the bar drugged him and then tried to frame him for the murder. Then he gets a telephone call which increases his mystification even further. It doesn’t seem to be a simple frame-up after all. The caller tells him to take a train and head for a small town in Wisconsin.

Thane picks up some clues on the train. He forms some theories but every time he finds a new clue he has to discard one of his theories.

There’s some decent suspense and some reasonably OK plot twists. We’re fairly effectively kept in the dark about what’s really going on until the end. There’s plenty of paranoia. The scene-setting early on is handled very skilfully.

It’s not much more than a novella so there’s not a huge amount of scope for in-depth characterisation. Thane is at least a moderately interesting protagonist. He starts off being scared and defeated but gradually he starts to get angry and that provides him with the motivation to try to turn the tables on the people who have turned his orderly life into a nightmare. The blond heavy Harvard is a nicely creepy character.

The atmosphere definitely has a hardboiled edge to it, with serious noir overtones.

The one weakness is the lack of a femme fatale. A femme fatale always adds some spice to a hardboiled mystery thriller.

There’s a change of pace at the end when we finally discover what the bad guys are really up to. It comes as quite a surprise although there are a couple of subtle clues that perhaps should have made it less of a surprise to me.

Once is Enough is entertaining stuff, not quite top-drawer noir but still pretty good. Highly recommended.

Armchair Fiction have paired Once is Enough with John N. Makris’s Nightshade (which is also quite good) in one of their excellent double-novel editions.
Posted by dfordoom at 12:47 AM