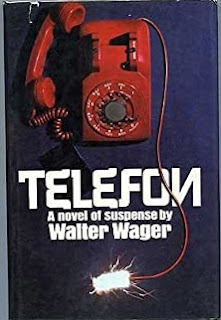 Walter Wager’s 1975 spy thriller Telefon is interesting for several reasons, the most notable being that the hero is a KGB agent. And he is definitely one of the good guys.

Walter Wager (1924-2004) was an American writer in both the crime and spy genres. Wager also wrote some TV tie-in novels, including (under the name John Tiger) the first of the Mission: Impossible novels (which I reviewed here).

Telefon opens with the KGB conducting a raid in Moscow. Colonel Aleksei Malchenko has stumbled onto a very big conspiracy indeed - a Stalinist coup attempt. The coup attempt is dealt with efficiently, except for one tiny loose end. One of the plotters, a documents expert named Nicolai Dalchimski, eludes the KGB net. And Dalchimski has taken the Telefon book with him.

The Telefon project has been long since abandoned and almost forgotten but it was impossible to extract those deep-cover sleeper agents. They are still in place. This doesn’t matter. Nobody is ever going to try to re-activate the Telefon project. It’s a relic of the past. In any case no-one could try to re-activate it even if they wanted to. They would need the Telefon book. And there are only three copies in existence and they’re protected by the most rigid security imaginable.

Except that now one of those copies of the Telefon book has disappeared.

Malchenko and his superior officer, General Streltsi, are appalled. Malchenko and Streltsi represent the new breed of KGB officers. They are committed to peaceful co-existence with the United States. They are not ideologues. They dislike ideologues. The last thing they want is for some maniac to try to put the Telefon operation into action.

At about the same time that all this is happening in the Soviet Union, thousands of miles away in Denver, Colorado, Harry Bascomb goes mad. He goes mad in a particularly destructive way. A couple of days later Ruth Alice Mintzer goes crazy, in an equally spectacular and destructive way, in Augusta, Maine. And then Carl Hassler goes nuts in northern Wisconsin and tries to crash his seaplane into a top-secret US Navy communications installation.

The American intelligence agencies don’t see any pattern in these events, but in KGB headquarters in Moscow Colonel Aleksei Malchenko and General Pyotr Streltsi most definitely do see a pattern. Some maniac really is activating the Telefon sleeper agents. That maniac can only be Nicolai Dalchimski. Dalchimski is about to start World War 3. 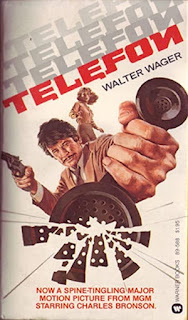 The KGB sends Grigori Tabbat to the US to solve the problem. Tabbat has to recover the Telefon book and liquidate Nicolai Dalchimski. Tabbat has no idea where to start looking. His talk is almost impossible but that’s why the KGB have selected him for this task. Carrying out impossible missions is the sort of thing that Grigori Tabbat does.

So this is a different kind of Cold War paranoia story. The bad guys are not the Americans or the Soviets. The bad guy is a dinosaur, a relic of the bad old days of the Cold War, an ideologically driven lunatic who not only wants to re-ignite the Cold War, he wants to turn it into a hot war.

Dalchimski may succeed because both the KGB and the American intelligence agencies like the FBI and the CIA operate the same way. They were established at a time of paranoia and paranoia is still their standard operating principle. The point of the novel is that all intelligence agencies on both sides are much the same. They all operate on a foundation of deception and suspicion. They all assume that the opposing agencies are carrying out the same schemes of deception and duplicity that they themselves are carrying out.

In this case the KGB has a problem and they have to solve the problem themselves. They can’t ask the Americans for help because the Americans would never trust them.

And it’s the nature of spy agencies that spies can’t even trust anyone in their own spy agency. Anyone in your own organisation might be a double agent. Grigori Tabbat has been assigned a female KGB agent, an agent based in New York, to help him but he cannot take the risk of trusting her and of course she’s not crazy enough to trust him.

There’s the classic race-against-time element here and there’s the equally classic theme of the hunter who may also be the hunted. It’s all handled fairly successfully. There’s plenty of action and there’s effective suspense. And there’s moral ambivalence, for those who like a bit more depth to their spy stories. It raises some questions about what, if anything, winning actual means in the world of espionage. This is most definitely not a spy spoof but there are at least some occasional moments of humour as the author pokes fun at the paranoiac mindset of spy agencies. And there’s a touch of romance.

Telefon is a pretty decent spy thiller and it’s recommended.