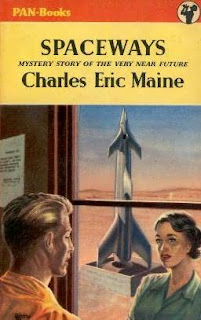 Spaceways is a 1953 British science fiction novel by Charles Eric Maine and it has an interesting history. It began life as a very successful radio play in 1952. In 1953 it was turned into a movie by Hammer Films (it was their first foray into science fiction and had the distinctive character-driven flavour of the company’s early science fiction films). The movie, directed by Terence Fisher, was successful enough to persuade Maine to turn it into a novel.

Oddly, for a British science fiction story, it is set in the United States. Conway (the narrator) is thirty-seven, ex-army, a bachelor (but hoping to change that since he met a charming young woman named Verna) and works in Washington on security matters relating to rocketry. He’s quite content in Washington and not at all pleased when he’s suddenly posted to the top-secret Site B in Nevada. He is to take over security at the site. Site B is where the Americans hope to launch their first satellite.

Site B is an odd enclosed little community. It’s near a tiny township ironically named Silver Falls (ironically because it’s in the middle of the desert and there are certainly no waterfalls anywhere nearby). The director is Dr Klein, who had worked on rocketry (at the infamous Peenemünde site) for Germany.

There are a lot of men and very few women. There’s not much to do outside of work. It’s an environment in which tensions are likely to arise. Conway soon realises that he has a ticklish security problem on his hands. Electronics whizz George Hills has a much younger wife, Marion. Marion is bored and restless and hates the place and the gossip is that she’s having an affair with one of the other scientists, a youngish man named Colby. George Hills is either unaware of the situation or he’s deliberately closing his eyes to it. Conway can see that trouble is brewing but he doesn’t know what to do about it. That trouble will come to a head when the rocket is launched.

The time for the launch of the first satellite rocket, SR ONE, finally arrives. The launch is not a failure but it’s not exactly a complete success either. It achieves orbit, but not the orbit that was expected. A vital piece of equipment also fails to work. Nobody can understand why. Until an FBI agent puts forward an extraordinary explanation.

This is a genuine science fiction story and astronautics plays a crucial rôle but it’s an unusually character-driven science fiction novel. Jealousy (both sexual and professional), suspicion, betrayal and love are as important to the story as courage and scientific boldness.

Conway makes some serious mistakes but then just about everybody in the story makes at least one major mistake. All the characters have very human weaknesses.

The ending is just a tiny bit contrived but the contrivance is dramatically necessary. And the ending is tense and exciting and it’s effective.

There are a few scientific implausibilities but remember that the story was written before the Russians put the first satellite into orbit. Maine is trying to write reasonably hard science fiction (there’s nothing scientifically fanciful) as well as human drama.

Spaceways is an unusual science fiction novel but an extremely interesting one and for me it works. Highly recommended.

I reviewed Hammer’s underrated Spaceways movie quite some time back.