Lionel Davidson’s The Night of Wenceslaus 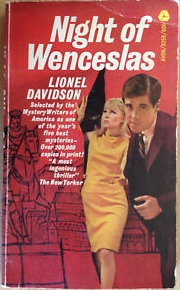 The Night of Wenceslaus was the first of Lionel Davidson’s spy thrillers. It was published, to considerable acclaim, in 1960.

Lionel Davidson (1922-2009) was an English writer who wrote nine spy thrillers and a few children’s books. Before turning to writing he had been a journalist and had served in the Royal Navy.

The hero and narrator is Nicolas Whistler. Whistler is (as he freely admits) lazy, aimless and indecisive. And by nature he’s a coward. He is also, as we soon discover, a rather amiable and essentially good-natured young man. He is also broke. His late father left him a share in a glass-manufacturing business but due to the carelessness with which his father’s will was drawn up Nicolas finds himself little more than a very lowly clerk, subsisting on a very meagre income. Nicolas has a girlfriend, Maura, with whom he might be in love. He owns a little MG sports car which he cannot afford but it’s his pride and joy. There is probably no young man in the whole of England less suited to being a spy but that is the destiny in store for him.

Nicolas’s mother is Czech and Nicolas spent his early childhood in Prague. As a result he speaks Czech fluently, and that’s how he becomes a spy.

It all starts when a lawyer named Cunliffe informs him that his Uncle Bela has died and left him a fortune. Nicolas quits his job and goes on a spending spree. And then he learns the truth. He has been cleverly manoeuvred into accepting what he is assured is a very simple and entirely risk-free task in Prague. It’s really at most a rather innocuous piece of industrial espionage so there’s no risk of any real trouble with the Czech authorities and the task is so simple that nothing can go wrong.

So Nicolas finds himself behind the Iron Curtain, in Prague. He has to endure some extraordinarily boring tours of glass factories but there is one compensation.That compensation is Vlasta Simenova. She’s the driver assigned to him, an impossibly tall and statuesque slavic beauty. And she’s very friendly. Very friendly indeed.

To his astonishment it all goes remarkably smoothly. No problems at all. This industrial espionage lark turns out to be ridiculously simple. Nicolas is feeling very pleased with himself. In fact he’s bursting with confidence. And then he has the first nasty surprise sprung on him. Even that isn’t too bad. By now he’s thinking of himself as a seasoned professional. But the nasty surprises just keep coming and he slowly realises just what it is that’s been manoeuvred into. Panic sets in. Nicolas is now a hunted animal.

The last third of the book is taken up by the pursuit of Nicolas by the Secret Police. This pursuit is handled by the author with imagination, verve and wit. Nicolas has no idea what he’s doing or how he’s going to get out of this mess but desperation unlocks qualities of resourcefulness that he had no idea he possessed. He makes one seemingly impossible escape after another but surely he must eventually be caught.

This is a lighthearted romp of a spy thriller. It’s whimsical and consistently amusing. Nicolas is a bungling amateur but somehow his bungling usually turns out successfully, possibly because he does things that are so foolish that the professionals who are chasing him get caught by surprise. There are no shoot-outs, in fact the level of violence is extraordinarily low, but there is plenty of excitement and suspense combined with the fun.

Nicolas Whistler is breathtakingly naïve but he’s a likeable hero and we can’t help admiring his ability to keep going in the face of seemingly impossible odds and his ability to bounce back from his own blunders.

The Night of Wenceslaus was filmed in 1964 as Hot Enough for June. There are a few changes to the plot in the movie but the whimsical tone is very much the same and the movie is well worth seeing.

The Night of Wenceslaus is a thoroughly enjoyable semi-comic spy romp and it’s highly recommended.
Posted by dfordoom at 6:51 AM