Bruce Graeme's Seven Clues in Search of a Crime 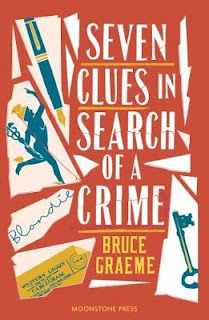 Seven Clues in Search of a Crime is a 1941 mystery by Bruce Graeme and it’s a bookish mystery - the amateur detective hero is a bookseller. It’s the first of his eight Theodore Terhune mysteries.

Graham Montague Jeffries (1900-1982) was a fairly prolific English writer, mostly in the crime genre. He wrote under a variety of pseudonyms, including Bruce Graeme. He achieved a great deal of early success with his Blackshirt novels (written under the Bruce Graeme pseudonym). Blackshirt was part of that rather appealing literary genre, the gentleman rogue. It’s a genre that began with Raffles and would reach a peak of popularity with the Saint and the Baron. Blackshirt was more than just a reformed thief, he was a reformed thief turned crime writer.

The idea of writing books about people who are involved with books was one that seemed to obsess Jeffries and it was a fruitful obsession.

The hero of Seven Clues in Search of a Crime is not just a bookseller but also an aspiring writer (and naturally he is an aspiring writer of detective stories). Theodore I. Terhune (known to his friends as Tommy) has a bookshop in Bray-in-the-Marsh in Kent. Bray-in-the-Marsh is the kind of sleepy idyllic small English town (not much more than a large village really) which you just know is going to be the setting for murder and mayhem.

We learn early on that there is more to Tommy Terhune than meets the eye. He looks like a very harmless, very meek, bespectacled youngish man. In fact he looks exactly like a mild-mannered bookseller. Looks can however be a bit deceptive. When he encounters a young woman who is being attacked by no less than five ruffians he has no hesitation in leaping from his bicycle and wading into the attack. He manages to hold off the attackers until a policeman arrives. As you might expect, the young woman (whose name is Helena Armstrong) now thinks that Tommy is pretty darned wonderful.

The puzzle that remains is why Helena was attacked. The ruffians seemed to be looking for something in her car, but she had nothing whatsoever that was worth stealing. Helena is the paid companion of Lady Kylstone. Now it might be plausible that the attackers mistook Helena for Lady Kylstone except for the even more puzzling detail that they made it obvious that Helena really was their target.

Tommy Terhune might have thought no more about this odd incident. After all Helena is quite unharmed. Then he discovers a clue. It’s a clue that interests Lady Kylstone almost as much as it interests Terhune. It concerns the Kylstone family burial vault but why anyone would be interested in that vault is more than anyone can say.

And then, quite by accident, Tommy uncovers another clue. This clue interests Detective-Inspector Sampson of Scotland Yard a good deal. Sampson cannot actually do anything about the perplexing events in Bray-in-the-Marsh. The Chief Constable of the district has not asked Scotland Yard for assistance and it would be most improper for Sampson to start working on a case in such circumstances. On the other hand Sampson points out that there’s nothing to stop Tommy Terhune from doing a bit of investigating on a purely amateur basis, and if he should report any findings to Sampson on a purely informal basis - well that be hardly be improper, would it? 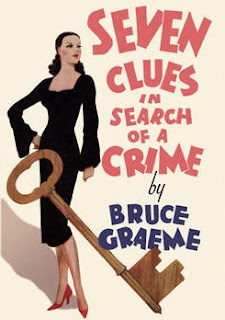 What makes this such an interesting (and slightly unconventional) example of golden age detective fiction is that Terhune soon has quite a collection of clues but there is no crime to which to link those clues. There’s no real evidence that any crime has been committed. On the other hand the clues definitely point to a crime of some kind. Possibly a crime in the past, or possibly a crime yet to be committed. What the nature of that crime might be is yet another mystery.

The author manages pretty successfully to keep both Terhune and the reader mystified. Are there any suspects? How can you have suspects when you don’t know what the crime is and you aren’t even certain that there is a crime? How can you tell if someone has a motive for an unknown crime?

This is not a comic detective story but it does have a great deal of wit and a certain playfulness. Bruce Graeme is having quite a bit of fun playing around a little with the conventions of the genre. The reader, like Tommy Terhune, has no clear idea what’s going on but like Terhune we’re having a fine time playing the game. And Graeme plays fair with us to the extent that we have at our disposal the same clues that Terhune has. The difficulty is in finding the common thread that ties together such disparate clues as the key to the Kylstone family vault, an obscure genealogical manuscript (once again the author’s interest in books comes to the fore), a company that manufactures automobile tyres, an American gangster and a woman known as Blondie. The common thread is there and all seven clues do finally fit together.

In the course of his adventure Terhune will meet two women. There’s Helena Armstrong, a thoroughly charming woman. And then here’s Julia MacMunn. She’s definitely a vamp (and a very entertaining vamp). Terhune is attracted to both of them. Which of them he prefers is another puzzle that he will have to unravel.

I’ve read and enjoyed a couple of Bruce Graeme’s Blackshirt novels, Blackshirt And Alias Blackshirt, but I had no idea that he’d written conventional detective stories (although it could of course be argued that there’s nothing very conventional about Seven Clues in Search of a Crime). The good news is that Moonstone Press have reprinted several of the Theodore Terhune mysteries. It was J.F. Norris’s glowing review of Seven Clues in Search of a Crime that inspired me to grab a copy, which proved to be a very good decision. He also contributed the introductions to these reprints. There's also a very positive review at the Cross Examining Crime blog.

Seven Clues in Search of a Crime is a delight from start to finish. It plays around with the conventions of the genre whilst still respecting them. It’s clever without being too much in love with its own cleverness. Very highly recommended.