Erle Stanley Gardner’s The Case of the Stuttering Bishop 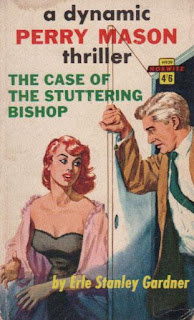 Erle Stanley Gardner’s The Case of the Stuttering Bishop is a Perry Mason mystery published in 1936.

It opens with a Church of England bishop from Australia asking Perry Mason for some legal advice regarding manslaughter and the statute of limitations. Which is a slightly odd thing for a bishop to do. If he is a bishop. You see this bishop stutters, and as everyone knows bishops don’t stutter.

The case, as it develops, involves a rich man named Brownley whose son contracts a marriage the old boy doesn’t approve of. There is indeed a case of manslaughter involved, and there’s a grand-daughter. Or rather there are too many grand-daughters. And there’s an enormous inheritance, and of course there’s murder. Paul Drake of the Drake Detective Agency is as usual involved but there are other private detectives poking around as well and they may be up to no good.

There are alibis aplenty, there are all sorts of questions of identity, there are witnesses but there’s the matter of what they actually saw and more importantly what it meant. There are lots of ruthless people and lots of tangled motives.

It’s pretty unusual for Perry Mason to get mixed up in a fist-fight. It’s even more unusual for Della Street to be involved in a fist-fight or involved with guns. But both those things happen in this story (and Della gives a pretty good account of herself). There’s quite a bit of action in this story and it’s worth remembering that Gardner started his writing career as a member of the hardboiled Black Mask school. And this is quite a hardboiled story at times.

It is usual for Perry and Paul Drake to indulge in a few minor activities that are perhaps not strictly legal, such as breaking and entering and burglary, and of course they do so in this tale. And Della does a few mildly naughty things as well, just little things like grand larceny. This is a 1930s Perry Mason story after all.

This time Mason gets himself in really deep trouble by, as always, not worrying too much about legal ethics. He’s in so deep even he thinks he could end up being disbarred or prosecuted or both and although he has some nice theories they have holes in them and he has no idea how to plug those holes. The only way out involves doing something he really dislikes doing.

The courtroom scenes are, as is quite often the case in the Perry Mason novels, involve preliminary hearings rather than actual trials (perhaps because this gives Gardner the chance to allow Mason to play a bit more fast and loose with procedures than would vie the case in a trial). He doesn’t face District Attorney Hamilton Burger in court but he does face him behind the scenes.

The solution is complex, with a lot of plot strands that somehow have to be woven together. Fortunately Gardner does this pretty well.

The Case of the Stuttering Bishop is typical 1930s Erle Stanley Gardner with Perry Mason flying by the seat of his pants and it’s hugely enjoyable.

I’m continuing with my project of comparing Perry Mason novels with the television adaptations from the 1957-66 TV series. My review of the relevant episode can be found here at Cult TV Lounge.
Posted by dfordoom at 7:29 PM