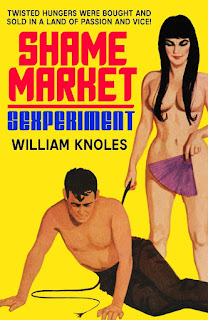 Shame Market is a 1964 sleaze novel written by William Knoles (1926-1970) under the name Clyde Allison. And this is sleaze with the emphasis on fun.

Private eye Brannigan has just set off to meet a new client, Magnus V. Dumbarton. Dumbarton is very old (he’s ninety-seven) and fabulously, almost unimaginably, rich. And almost unimaginably eccentric. He suffers from a medical condition which requires him to spend his while life in a room heated to 98.6 degrees Fahrenheit. Dumbarton figures if he has to live in a virtual hothouse he might as well do it in style, so he’s had a gigantic airship hangar converted into a hothouse. That’s wJuliet here he lives. And if you’re gong to live in a hothouse you might as well do it properly, so the hangar is filled with exotic plants and animals. You know the sort of thing you’d fill a hothouse with - colourful parrots and naked Polynesian girls.

Juliet is actually Juliet V. Dumbarton, the V standing for Verne, and she prefers to call herself Juliet Verne. Juliet already has a colourful past, such as the time she captured an entire Boy Scout troop and forced the poor lads to pleasure her. All of them. Juliet has perpetrated lots of similar harmless girlish pranks.

The only clue to Juliet’s whereabouts is that she is being held captive somewhere in a town on the 15th Parallel. It could be 15 North or 15 South. So Brannigan decides to check out every town of significant size along those lines of latitude. His chances of success might seem small but he’s getting two hundred bucks a day plus expenses so he’s not complaining.

Brannigan’s search for Juliet leads him from one woman’s bed to another. The novel is a series of sexual encounters but at least the author manages to bring these encounters about in interesting and amusing ways. When you find a woman, naked except for black stockings and black gloves, rifling your suitcase in your hotel room you’re naturally surprised. You’re even more surprised to discover she’s a CIA agent. And you’re more surprised still when she explains why she carries out her intelligence duties almost stark naked. Celia, the nude CIA agent, is a graduate of the CIA’s Seduction and Slaughter course and she knows all sorts of ways in which naked girls can kill people. British spies with a Double 0 number are licensed to kill. Celia has a XX number - she’s licensed to do other things as well. Which she does with enthusiasm.

While some pulp sleaze novels could be quite dark this one is light-hearted and engagingly silly. It’s played mainly for laughs. Knoles also wrote a series of spy spoof novels and Shame Market, with its exotic settings, has something of that kind of feel. It’s a private eye spoof novel, with some spy spoof motifs and with lots of sex.

Brannigan is very hardboiled and very cynical, and very unscrupulous. He’s not a bad guy but he looks out for number one and he’s not going to risk his neck to do heroic things, like rescuing damsels in distress. That’s not to say he won’t rescue a damsel in distress - he will do so if there’s no risk and if there’s something in it for him. If the damsel is likely to show her gratitude, either in the form of cash or in bed, then he’ll consider it. This could be a recipe for noir fiction but in this case it’s played for amusement, with perhaps an attempt to add an edge of black comedy.

Brannigan is like a cross between Mike Hammer and Matt Helm (the Matt Helm of the movies not the novels), but without a trace of chivalry.

Brannigan is cynical and the book itself is pretty cynical as well, albeit in an obviously  tongue-in-cheek manner. The women are there to take their clothes off and jump into bed, which they do with alacrity.

In its own way it’s amusing sleazy (very sleazy) fun and it’s recommended.
Posted by dfordoom at 11:53 PM