Vin Packer's The Girl on the Best Seller List 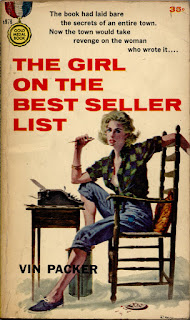 Marijane Meaker (born 1927) has had a successful writing career in several different genres. Between 1952 and 1969 she wrote pulp crime novels under the name Vin Packer. The Girl on the Best Seller List, published in 1960, is one of her better known titles from this period.

Gloria Whealdon lives in small town called Cayuta in New York State. She has just published a bestselling novel, called Population 12,360. It’s a Peyton Place-style sin and sensation novel set in a town that is obviously Cayuta and all the characters are thinly disguised versions of the townsfolk of Cayuta. Very thinly disguised. And her portraits of the townspeople are very unflattering indeed.

Not surprisingly the book has made her enemies in Cayuta. In fact quite a few of the Cayutians are now spending most of their waking hours thinking of ways to kill Gloria Whealdon. Her husband Milo is one of them.

Gloria wasn’t overly popular in Cayuta even before she wrote her book. She is awkward, a bit of a slob and socially inept. She might not be a very good writer but she has an unerring instinct for spotting people’s weaknesses and she is merciless in exposing those weaknesses in print. This particular talent is something that sells a lot of books.

This is a crime book but although there’s plenty of talk of murder it takes a long long time before any crime of any kind occurs. This is necessary because this is not a crime book that relies on alibis or fingerprints. All that matters is motive. As the story unfolds we discover more and more characters who have reasons to fear, reasons to hate and things to hide. All potential motives for a crime.

Each chapter begins with a quote from Gloria Whealdon’s book, so there’s a kind of “book within a book” thing going on. Of course The Girl on the Best Seller List is in its own way as much of an exposé of small town life as Gloria Whealdon’s fictional Population 12,360, although The Girl on the Best Seller List has the psychological insights  that Gloria Whealdon’s book lacks. Gloria Whealdon is a very mean-spirited person who has written a very mean-spirited book. Vin Packer’s book is not as deliberately cruel but it’s not exactly flattering to most of its characters either. They have some serious personality flaws and they’ve managed to mess up their lives rather comprehensively.

As to the mystery, there are at least four obvious suspects and several less obvious ones who can’t be entirely dismissed. The possible motives are quite varied. There’s not much in the way of actual detection but there is an important clue that one of the characters picks up on that leads to the solution. It certainly doesn’t qualify as a traditional puzzle-plot detective story but it’s not quite a typical psychological crime novel either. And although there’s plenty of foreshadowing it’s not an inverted mystery. Vin Packer takes her own idiosyncratic approach to writing a crime novel.

There’s a fair amount of rather black humour.

The “book within a book” aspect gets a twist as well - it turns out to be a book about two books. Which sounds a bit postmodern.

To add one more layer one of the characters is a psychologist and he’s treating several of the other characters.

Whether you’ll be satisfied by the solution to the mystery is a matter of taste but the motive is interestingly odd.

There’s no graphic sex but a great deal of the plot revolves around sexual and emotional entanglements.

The Girl on the Best Seller List is unusual and even at times just a little bizarre. The characters are complex although they’re also somewhat outrageous and exaggerated. It’s an oddity of a book, not really typical of crime fiction of its era, but its oddness makes it intriguing. Recommended.
Posted by dfordoom at 8:53 PM