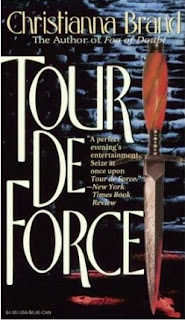 Tour de Force, published in 1955, is one of the later books of Christianna Brand who was herself one of the later writers of the golden age of the detective story. It features her usual series detective, Inspector Cockrill.

Cockrill is on the wrong side of middle age and a bit on the scruffy side. He’s what you might call a quiet eccentric.

For reasons which even Inspector Cockrill himself could not explain he has signed up for a Conducted Tour with an outfit called Odyssey Tours. It is to be a Mediterranean tour. In fact most of the novel takes place on a mythical island, San Juan el Pirata. It is a gloriously odd and colourful setting that Brand has created. The island is just off the Italian coast but it was occupied in the late 18th century by a notorious Spanish pirate. As a result the inhabitants speak a Spanish-Italian patois that seems to be incomprehensible to both Italian and Spanish speakers. As a further result of its odd history the island is an independent principality. This gives it a certain extra touch of the exotic which is partly what attracts the tourists. The fact that the main industry, indeed the only industry apart from tourism, is smuggling is another reason for its popularity as a tourist destination.

There are only seven suspects, six of them being members of the Odyssey Tours party and the seventh being the tour guide Fernando. To add a bit of zest, one of the suspects is Inspector Cockrill! This gives Cockrill a very strong incentive to solve the crime. And it is clear that he will have to be the one to solve it. The local police chief is an accomplished smuggler but not a very efficient detective. The San Juan el Pirata police also do not believe in fancy policing techniques, such as fingerprinting or conducting post-mortems. This means that Cockrill will have to solve the puzzle without any assistance at all from forensic science.

At first Cockrill is very puzzled indeed since the other six suspects have alibis provided by Cockrill himself. Every one of them was under his personal observation at the time of the murder. Upon further reflection however he realises that actually all of the alibis are worthless. Any of them could have committed the murder. And there have been some little romantic dalliances on the tour, not to mention a spot of blackmail, so everyone has a motive.

Adding to Cockrill’s difficulties is the fact that the hereditary prince will not let any of the seven leave the island unless he has someone he can hang for the murder. While it’s desirable that the person hanged should be the guilty party this is not essential.

While Tour de Force certainly has a formidable puzzle plot it has a lot of other things going on as well. Mostly the other goings on are comic in nature. Brand has an enormous amount of fun at the expense of tourists and she is quite merciless - she mocks the seasoned travellers just as much as the first-timers. In fact she has fun at the expense of just about everybody -  the inhabitants of San Juan el Pirata, the local police, the island’s hereditary prince, and anybody else who happens to come along. It is mostly fairly good-natured humour.

As for the plot, this book belongs to a certain sub-genre of the detective novel but to say any more on that point might give a clue to the ending. As to that ending, it makes use of a particular plot device that quite a few golden age writers were attracted by. In my view it’s a device that never actually quite works, the problem being that it stretches credibility beyond breaking point. In this case Miss Brand almost gets away with it by turning its weakness into a strength by using it as a clue as to how the puzzle is finally solved. I still have reservations about this device but this is one of the more successful attempts to pull it off. As you may have noticed I’m being extremely vague about the plot of this one - it’s so clever and twists back on itself in such an ingenious manner that I’m not going to take the slightest risk of spoiling it.

There is one further thing that should be noted about this book. By 1955 the puzzle-plot detective story was falling out of favour with critics and publishers. The golden age detective story was being attacked as being unrealistic and artificial. So how does Christianna Brand respond to this? She gleefully sits down and writes one of the most outrageously unrealistic and artificial of all detective novels! This book does not make one single solitary concession to realism. And to make sure we get the point, she gives it a setting that does not exist and never could exist. San Juan el Pirate is a fantasy setting. Perhaps such places existed once but there was (alas) no place in the world of the mid-20th century for such a fantastic concoction of a setting. This has to be one of the more spectacular examples of an author hurling defiance at small-minded critics. I liked this book anyway, but this aspect of it makes me like it a whole lot more.

Tour de Force is in its own way a totally uncompromising exercise in golden age detective fiction. And it’s immense fun. Highly recommended.
Posted by dfordoom at 7:34 AM