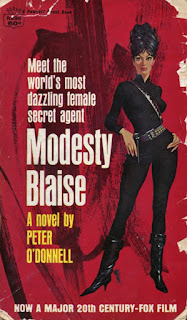 The 1965 novel Modesty Blaise has a rather interesting history. English writer Peter O’Donnell (1920-2010) created the Modesty Blaise comic strip in 1963. It was wildly successful and appeared regularly for nearly forty years. A Modesty Blaise movie seemed like an obviously good idea. But the choice of director was going to be tricky. The movie would have to be light-hearted, sexy, funny and exciting. Joseph Losey had never made a light-hearted, sexy, funny or exciting movie in his life so naturally he was selected for the job. Not surprisingly the movie was generally regarded as a train wreck and did not set the  box office on fire (although it has its weird charms). But that’s not the end of the story.

Peter O’Donnell had been employed to write the screenplay and was also offered the opportunity to write a novelisation of the film. Very little if anything of O’Donnell’s screenplay made it into the film but he based his novelisation on his original screenplay. The novel appeared in 1965, the year before the film, and was a huge success. O’Donnell would go on to write another ten Modesty Blaise novels as well as a couple of short story collections.

The novel gives us some of Modesty’s backstory. She is of indeterminate ethnicity and indeterminate age. In 1945, aged around twelve, she had been in a Displaced Person’s Camp in the Middle East. A few years later she was running a large and very successful criminal empire with an Englishman named Willie Garvin. Their criminal activities were highly varied but they steered clear of drugs or vice. Jewel and art thefts were a particular speciality. They did however dabble in freelance espionage. At the age of twenty-six, having become extremely rich, she decided to retire. For some odd reason she had always intended to retire to England, which is why she was very careful in her espionage activities not to do anything that might be construed as being unfriendly to the interests of Her Majesty’s Government. She lives in extreme luxury in a London penthouse.

And now Tarrant at the British secret service needs her help. It’s all to do with a sheikh who needs to be buttered up, to the tune of ten million pounds, and he wants the money in precious stones. And Tarrant has very good reason to think than an attempt is going to be made to steal the stones, and by a group that knows its business. Stealing jewels was something that Modesty Blaise used to be very good at so it stands to reason that she’s uniquely qualified to protect jewels from other people with similar skills and similar larcenous intentions.

Tarrant has been a spymaster for a long time and his judgment of people is pretty good. He considers and rejects the idea of blackmailing or coercing Modesty into coöperating. She’ll be more useful if she’s willing and most importantly Tarrant has figured out that she is actually bored in retirement. She has no desire to return to a life of crime but she misses the excitement of that life. Doing jobs for the Secret Service will be the perfect cure for her boredom. And his assessment turns out to be absolutely correct. Modesty Blaise is addicted to danger and excitement.

The first step will be to rescue Willie Garvin, her former partner-in-crime, devoted friend and invaluable lieutenant. He’s currently awaiting execution in a South American gaol. Modesty will definitely have to do something about that. Having done that their assignment is to use their extensive underworld connections to find out how the diamonds are going to be stolen, and then take steps to foil the robbery. In practice this will require them to get deeply involved with the gang behind the heist, and a very dangerous gang it is too.

While the novel adheres fairly closely to the James Bond formula (exotic locations, glamour, wealth, gadgets, an outrageous plot involving an intricate criminal conspiracy, violence, sex and a hint of sadism) Modesty herself is a kind of anti-James Bond. Bond is essentially an Establishment type. He’s an officer and a gentleman. And while he’s prepared to all sorts of things in the line of duty in his private life he’s very much a law-abiding citizen. He also has rather old-fashioned views on most subjects. Modesty is a street urchin made good, she’s an unrepentant criminal and her views on subjects such as sex and marriage would not meet with Bond’s approval. Bond is a professional spy. Modesty is a professional criminal and amateur secret agent. Bond generally obeys orders. Modesty doesn’t actually take orders from Tarrant at all. He did her a favour and she’s repaying the debt but she’s going to do the job her way or not at all. In fact the only thing Modesty has in common with Bond is that they inhabit, broadly speaking, the same genre.

There’s quite a bit of sex in this book but at least it’s not graphic. The violence is rather more confronting, certainly by mid-60s standards. Modesty and Willie kill when they deem it necessary and without any hesitation whatsoever and they certainly don’t believe in giving the bad guys a sporting chance. They are quite exceptionally ruthless. OK, they only ever kill bad guys but they kill a lot of bad guys.

This kind of pulpy spy thriller needs a larger-than-life super-evil villain and Gabriel fulfils that rôle admirably. He’s a criminal genius, a sadist and a fan of Tom and Jerry cartoons.

While there are the obvious affinities with Bond-style spy thrillers this is really a caper story. Gabriel is a villain on a very large scale, in fact on the kind of scale on which Bond villains work, but he is only interested in grand larceny, not world domination. It has to be said that the heist which is the centrepiece of the whole tale is a pretty good one.

One amusing feature is O’Donnell’s obsession with giving us lovingly detailed descriptions of various weapons and associated paraphernalia such as shoulder holsters, and the special harness for Willie’s knives (Willie prefers knives to guns). There are also the gadgets Willie makes for Modesty. He might not have the vast resources of the British Secret Service but he has a real gift for devising deadly little toys for his friend. And on the subject of gadgetry, while Batman has his utility belt Modesty has her utility bra.

Given Modesty Blaise’s you might expect the novel to have a bit of a comic strip feel. It does, up to a point. It’s fast-paced and the emphasis is on action. It’s fairly light-hearted in tone, but with a few darker moments and with copious quantities of violence. Modesty and Willie are likeable enough and despite their comic strip origins they are a little bit more than just cardboard cutout characters.

The only other Modesty Blaise novel I’ve read is Last Day In Limbo which was the eighth book in the series. It appeared in 1976 and while it’s interesting and quite enjoyable it does have a slightly different feel to the first novel. It’s still worth a look.