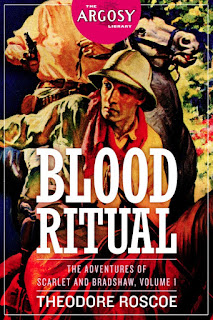 Blood Ritual is a collection of adventure tales by celebrated pulp writer Theodore Roscoe. These stories were originally published in various pulp magazines such as Action Stories and The Danger Trail between 1927 and 1929.

These tales feature either American curio hunter Peter Scarlet or the naturalist Bradshaw. These are stories of adventure in the Mysterious East, in jungles and exotic seaports and the deserts of Arabia and anywhere that fortunes can be made without too much concern for business ethics, or any other kind of ethics.

The stories are quite short and mostly they’re quite simple. They’re like campfire yarns but they always have one twist at the end and it’s usually a good one.

Theodore Roscoe (1906-1992) was an American naval historian and a prolific pulp writer.

In Jungle Joker Peter Scarlet finds his jungle bungalow taken over by a madman. He is subjected to a reign of terror. There seems to be no escape. Not only is this madman armed, he is accompanied by his pet Joker. Joker is a savage orang-utan. Any attempt to free himself of his tormentor would expose Scarlet to certain death at the hands of the enraged ape.

Framed is a bit more interesting. A murder takes place in a bar. Whether there were any actual eye-witnesses is uncertain, although there is certainly a witness who claims to have seen everything. His evidence is enough to send a young man to prison. Peter Scarlet was there, but doesn’t seem to have seen anything. There’s a twist of course, and it’s a moral twist.

Wolves of the Yellow Sea is great fun. It’s a tale of piracy and pigs. A junk with a crew of Malay cut-throats encounters even more bloodthirsty Arab pirates. The pirates are prepared for a desperate fight but they are not prepared for what is in store for them on this junk. A clever, amusing, exciting and witty little tale.

The Phantom Castle of Genghiz Khan concerns a legend of a castle that sank below the waters of a lake, but periodically (so the legend goes) the castle rises for a short while from the lake. To add some spice the legend also tells of a fortune in jewels concealed in the castle. Of course it’s only a legend. Or is it? This is one of those tales that seems like it must involve the supernatural but Roscoe comes up with a remarkably cunning non-supernatural explanation. It’s a tale that offers danger and riches to a man with both courage and greed and it has a nice twist to it. And it’s a wonderfully atmospheric story.

Blood Ritual is a tale of madness, of a man who has spent too much time alone and away from civilisation. And then there is the endless heat, and fever that can be avoided only by large doses of quinine and sometimes the doses are a little too large. If there happens to be a vicious two-handed battle-axe lying about the whole situation can get quite dangerous. Peter Scarlet had been in tight spots before but this time he fears his end has come. A nifty little story.

In Claws of the Night Peter Scarlet has made an extraordinary find in a cave on the shores of the Dead Sea. He has to make certain arrangements with the authorities and will be gone for a couple of days but that’s no problem as the trove will be guarded by a young English engineer named Cameron. He is a man who can be trusted absolutely since he has no vices, except music and that’s hardly a vice that can be exploited. The treasure will be safe. Nothing can go wrong. But of course it does. A pretty decent story.

Sun-Touched concerns two young American engineers with a great fondness for music. They have an unfortunate encounter with three very disreputable fakirs and one of the young Americans suffers an unusual curse. A good and original little story.

In The Idol Breaker both Peter Scarlet and a brutal French sea captain are after a fabulous golden Buddha. The statue resides in a cave and it has a legend attached to it. The meaning of the legend is clear but the details are obscure. Those details are about to become all too clear. It is unwise to offend a Buddha. Another fine story.

In The Brass Goddess Peter Scarlet runs afoul of murderous cut-throats determined to steal a fabulous gem from him. Scarlet is equally determined not to give up the gem. The cut-throats have devised what they consider to be a fool-proof method of torture in order to persuade him. Unfortunately for them they don’t know as much about the local goddesses as Scarlet does. This one has a nice little additional twist at the end. A very good story.

Scarlet wants very much to find a gem known as the Floating Opal and he would also like to know what became of the young English trader John Bourncamp who had this jewel in his possession a few years earlier. In Doom Dungeons the Rajah Ranjit Ji lures Scarlet to his remote mountain castle by suggesting that he can give the American curio-hunter the information he seeks. It is the beginning of an ordeal of terror. Peter Scarlet will also learn that it pays to be nice to snow leopards. This is a sinister tale, and a good one.

The Thirteenth Knife is a story of a quiet Argentinian artist in the Orient, of a bar fight, and of revenge. It is revenge achieved with exquisite style and in an entirely appropriate manner. A very fine story.

Scum of the East is superb. A young American woman is searching for her boyfriend, an engineer who had been employed to open up a tin mine deep in the jungle. He hasn’t been heard from since. She fears that he’s gone native. To find him she’ll need a guide and the only guide with sufficient knowledge of the area is a white man known only as Scum, who has well and truly given in to dissipation. Drink, drugs, women, he’s done it all and now he’s a shambling wreck of what was once a man. Bradshaw and his pal, the Dutch trader Schneider, can’t possibly let the girl go off into the jungle with only Scum as a companion so they decide to tag along.

The jungle is infested with venomous reptiles and tigers but these turn out to be the least  of the hazards the little expedition has to deal with. This is a story that makes you think it’s going to be predictable but Roscoe has some nifty tricks up his sleeve.

I reviewed another collection of Theodore Roscoe’s pulp stories, The Emperor of Doom, a few years back.
Posted by dfordoom at 12:32 AM