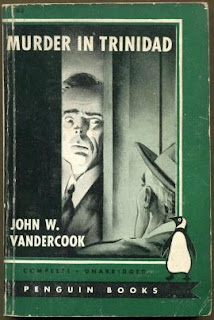 John Vandercook (1902-63) was an American author and journalist who, between 1933 and 1959, wrote four murder mysteries featuring his series detective Bertram Lynch. Murder in Trinidad was the first of his detective novels. Rather extraordinarily it seems to have been the subject of no less than three movie adaptations!

The narrator is a young American mediaeval historian named Robert Deane. It is on the steamer from New York to Trinidad that he first notices Englishman Bertram Lynch. He notices him because he is so very ordinary. He is simply too ordinary to be true, and there are one or two very minor indications that Lynch is actually a man who is very far from being ordinary. Lynch is in fact a special investigator for the League of Nations and his area of responsibility is drug trafficking. This is what has brought him to Trinidad. There are, he tells Deane, 120,000 Hindu labourers in Trinidad and opium is a very major problem.

Trinidad was of course at this time still very much part of the British Empire.

Lynch’s arrival in Trinidad was supposed to be very hush-hush but when an attempt is made to kill him just a few hours after his arrival it is obvious that someone at least is aware of his presence on the island. Someone who is not on the side of law and order. Lynch usually works alone but on this occasion, forced to change his plans quickly, he is happy to recruit an amateur assistant and Robert Deane is delighted by be given the opportunity to play at being a detective.

The first half of the book is very much in the thriller mould, in fact somewhat in the outrageous mould of Edgar Wallace. Lynch and Deane have all sorts of adventures in the wilds of the Caroni Swamp. This is an impenetrable mangrove swamp, but it’s not just impenetrable, it’s deadly. One false step and you’re engulfed by the quickmud (like quicksand except worse). The Caroni Swamp is also home to several varieties of extremely deadly snakes. No-one has ever explored this swamp. It cannot even be investigated from the air - the peculiar geography of the area sets up air currents so frightening that no pilot will risk overflying the swamp.

There is a local legend that somewhere in the heart of the Caroni Swamp there is an island and that on the island is an outlaw town that is home to smugglers and was at one time a haunt of pirates. Of course it’s just a story that is told to gullible tourists. Or is it? Bertram Lynch suspects that the legend is true. In fact Lynch and Deane will soon discover that the truth is evert bit as extraordinary as the legend and they will have numerous narrow escapes from death.

This is all jolly good fun if you enjoy dicing with death but there is a crime to be investigated. There is the matter of the opium smuggling but there is also a murder. A murder that took place many years earlier. At least that’s when the first murder occurred. The second murder took place almost at the moment of Lynch’s arrival in Trinidad. And there is a genuine golden age of detection puzzle plot here. Including floor plans!

Deane is an obvious Dr Watson character. Lynch certainly bears more than a passing resemblance to Sherlock Holmes. Like Holmes he is a master of disguise. And like Holmes he is intellectually arrogant, except that Lynch makes Holmes seem modest and self-effacing. Deane actually derives a certain amount of amusement from Lynch’s rampant egomania. Lynch is also a very unconventional detective. He operates more like a secret agent than a policeman, and his disregard for the law and for ordinary morality is breath-taking. Lynch considers his job to be so important that he is not obliged to worry about such irritating details. He’s one of the good guys so he’s allowed to break the rules. That’s not to say that he’s an anti-hero but his methods are at times hardly ethical.

Despite being apparently a dull little middle-aged man Lynch is more of an action hero than the average golden age fictional detective. He leaves a trail of mayhem behind him.

Having started out as a thriller and then become a puzzle-plot mystery it reverts to its thriller roots towards the end before the puzzle finally gets solved. Unfortunately the identity of the criminal is terribly obvious. The crucial clue is amusing though.

Trinidad is an interesting enough setting but it’s the Caroni Swamp and the hidden world at the heart of that swamp that are the highlights of the book. The ending offers us yet another bizarre and unusual setting but I won’t spoilt it by saying any more.

Murder in Trinidad is all over the place and I’m not sure I could describe it as being a good book or an entirely successful one but it’s offbeat and it’s fun and it’s worth a look if you don’t mind the fact that it works better as a thriller than as a detective story.

Tomcat's review of the second Bertram Lynch book, Murder in Fiji, at Beneath the Stains of Time makes it sound like it might be a bit more of a puzzle-plot mystery than Murder in Trinidad.
Posted by dfordoom at 12:31 AM