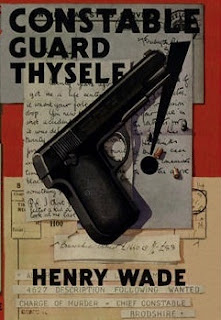 Major Sir Henry Lancelot Aubrey-Fletcher, 6th Baronet (1887-1969) wrote twenty-two novels under the pseudonym Henry Wade. He was one of the more interesting golden age detective writers and was at times quite innovative. Constable Guard Thyself! appeared in 1934. It was his ninth book and featured his series detective Inspector John Poole.

The book starts with the murder of a policeman. Even more shockingly, a senior policeman is the victim. There is no mystery about the murder at all. Albert Hinde, recently released from prison and a man with a very strong grudge against the victim, had sent a threatening. He was seen in the area and he followed up the letter with a personal confrontation with the victim. There can be absolutely no doubt of Hinde’s guilt.

There can also be absolutely no doubt that Hinde will soon be in custody. His distinctive personal appearance combined with the fact that he has every policeman in the Brodshire Constabulary, and every policeman in all the neighbouring counties, searching for him guarantees that. A shocking crime but hardly a challenging case. The superintendent in charge of the investigation sees no need whatsoever to ask Scotland Yard for help.

But of course it doesn’t turn out to be quite so simple. Albert Hinde cannot possibly elude such a massive manhunt for very long, but somehow he manages to do so. It’s as if he has vanished from the face of the earth. And the superintendent has some tiny niggling doubts. He is also unable to resist the mounting pressure to call in Scotland Yard. Inspector John Poole is despatched by the Yard to lend assistance.

Poole soon discovers that there are quite a few puzzling things about this case. Not just puzzling, but very disturbing. If his suspicions are correct the case is even more shocking than initial appearances suggested. Poole is patient and methodical. His belief is that when you reach a dead end you simply have to start again from the beginning, discarding all preconceptions.

Apart from the delightfully complex and ingenious plot the most interesting thing about this book is that it deals with matters that most English detective writers of the 30s would not have dared to go anywhere near. Poole finds evidence that suggests police misconduct. Not just misconduct by one “bad apple” but possibly involving a number of officers. And not just minor indiscretions but possibly misconduct of a sort that could discredit the entire criminal justice system. In fact Poole finds himself in a very awkward situation - he cannot share some of his suspicions with anybody, not even fellow police officers.

There are also questions of loyalty, and the conflict between loyalty and duty. Wade does not try to pretend that these are easy questions and he teases out the nuances with considerable skill.

Poole is a fairly believable character. He’s a fine detective but he’s not infallible. He’s honest and conscientious but there are times when he feels that he has to pursue a particular course of action even though he’s not entirely confident that it’s the right to do. His strength, in the moral sense, is that he is aware of the potential problems. He always tries to do the morally right thing and he’s also the sort of policeman who instinctively dislikes cutting corners. He’s also very much a believer in respecting the rights of suspects even if it makes his job more difficult.

The relationship between Poole and the local superintendent is quite complex. They both appear to be trying to do the right thing but they don’t always agree as to what the right thing is.

The plot itself is not quite an impossible crime but it does tend in that direction. It’s easy to see how the crime could have been committed, except that the physical evidence does not seem to square with any of the possible explanations.

There’s also a neat unbreakable alibi aspect to the story.

Constable Guard Thyself! is Wade in top form and golden age detective fiction doesn’t get much better than that. Highly recommended.

Wade’s The Hanging Captain, The Duke of York’s Steps, No Friendly Drop and Heir Presumptive are all very much worth reading as well.
Posted by dfordoom at 1:16 AM