Gavin Lyall's Midnight Plus One 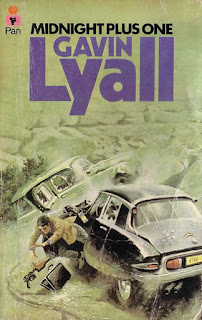 Midnight Plus One was the third of the successful thrillers written by Englishman Gavin Lyall (1932-2003). It was published in 1965.

Lyall’s first two thrillers had aviation backgrounds. Midnight Plus One stays firmly on the ground but there’s no shortage of action and excitement.

Lewis Cane (the narrator) had been a renowned secret agent for the British in the Second World War, working behind enemy lines in Occupied France. After that he was a spy with the British Secret Intelligence Service. Now he describes himself as a business agent. He solves ticklish business problems. His solutions are never illegal but they do require a certain ethical flexibility. He likes to think of himself as having moral standards. He doesn’t work for criminals and he’s not a hired killer but if someone shoots at him he’ll certainly shoot back.

An old acquaintance, a French lawyer named Merlin, has offered him a lucrative job. All he has to do is to drive a businessman named Maganhard from Brittany to Liechtenstein. It sounds simple but there are complications. It’s quite possible that business rivals may try to stop Maganhard from reaching Liechtenstein. They may try to stop him by killing him. And the police are after Maganhard as well (although Merlin assures him that Maganhard is entirely innocent). Cane can handle himself pretty well but for this job it seems advisable to have a professional gunman/bodyguard along as well. Cane would like to have Bernard or Alain, regarded as the two best gunmen in Europe.  They’re not available but Harvey Lovell is. Lovell is an American and he’s considered to be Europe’s third best gunman. He’s a former member of the US Secret Service so he certainly has had the right training to be a bodyguard and he seems like the ideal man.

Another complication is that Maganhard insists on bringing his secretary along. Helen Jarman is a young, pretty, very upper-class Englishwoman and she regards Cane and Harvey as being little more than glorified gangsters. This happy little party sets off in Maganhard’s Citroën DS. The first signs of trouble had already appeared when they picked up the car. The man from whom they picked it up died rather suddenly, possibly as a result of the three bullet-holes in his body.

It soon becomes apparent that somebody knows about their little excursion to Liechtenstein and that the somebody in question has employed quite a few very nasty and very well-armed thugs to stop them from reaching their destination.

It’s a thrilling chase across western Europe, a chase that leaves an impressive trail of mayhem and dead bodies behind it.

It doesn’t take long for Cane to discover that he has another problem. Harvey Lovell is very good at his job but he drinks a bit. In fact he’s a full-blown alcoholic. Harvey’s problem is that his job as a bodyguard requires him to be prepared to kill people if necessary, and to be prepared to get himself killed to protect his client. He’s OK with the risking his own life part of the deal. He definitely is not lacking in guts. But he’s not quite so OK with the killing people bit. If he drinks enough he can deal with it. When he’s sober he’s very very good at his job. The question is whether he can stay sober.

While this is very much an action thriller it’s also an interesting psychological study of men who live by violence. Harvey has his troubles but Lewis Cane has his own demons to wrestle with as well. The war never did really end for Cane. In the course of this adventure he will be brought face-to-face with unfinished business from the war and he will encounter old Resistance comrades for whom the war also never ended. Lyall combines the action and the psychology with consummate skill. There’s a psychological dimension but also a moral dimension as well. Cane and Harvey are not mere thugs or strong-arm men. Maybe life would be simpler for them if they were but they are what they are and they have to learn to deal with it.

There are some splendid and original action set-pieces, including trench warfare (in 1965) with a vintage Rolls-Royce. There are the expected double-crosses but Lyall throws in some pleasing surprises.

This is an intelligent complex thriller. Lyall was one of the best thriller writers of his generation and Midnight Plus One sees him at the top of his game. Highly recommended.

And definitely check out Lyall's aviation-themed thrillers, The Most Dangerous Game and Shooting Script.
Posted by dfordoom at 1:53 AM