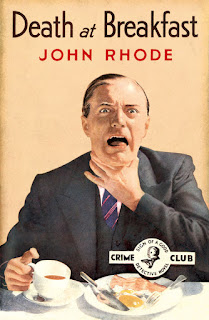 Victor Harleston is a clerk working for an accounting firm. He lives with his half-sister Janet who keeps house for him. On one particular fateful day she brings him his morning up of tea as usual. Half an hour later he sits down to breakfast but seems somewhat unwell. He gets up from the table, stumbles, then collapses. Janet hurries to the nearby surgery of Dr Oldland. By the time the doctor arrives it is clear with Victor is beyond human aid. He dies shortly afterwards. It is also clear to Dr Oldland that Victor has died due to the effects of poison.

Victor was not the most pleasant of men. In fact he was exceedingly unpleasant and remarkably mean about money. Janet is obviously not overly distressed by his death. Janet was the only other person in the house and it soon transpires that she had a very strong motive for murder. To Superintendent Hanslet it seems like a very clear-cut case indeed.

The postmortem however creates difficulties. It’s not consistent with the evidence found at the crime scene.

It’s also odd that Hanslet’s old friend Dr Priestley seems to be interested in the case - usually Hanslet has a great deal of trouble persuading Priestley to become involved.

In the course of their investigation Superintendent Hanslet and Inspector Waghorn of the Yard uncover evidence of a second murder. There is obviously absolutely no connection between the two crimes. Well, there is one odd link but Hanslet and Waghorn aren’t too concerned. It’s clearly just a coincidence. Dr Priestley however takes a very dim view of coincidences.

As usual Dr Priestley does not find it necessary to leave his comfortable home in Westbourne Terrace in order to visit crime scenes and crawl about on hands and knees looking for cigar ash. He sits in his armchair and gives the case his full intellectual attention. He offers suggestions, which are invariably unexpected but invariably useful. His main contributions however are his penetrating criticisms of the theories that Hanslet and Waghorn construct in order to explain the link between the two crimes. The problem is that these theories do not explain the link at alland and rely on motives which are entirely fanciful, although Hanslet is not always pleased to have these things pointed out to him.

Superintendent Hanslet does not exactly cover himself with glory in this case. His theorising is enthusiastic and imaginative but based on little more than guesswork and wishful thinking. Priestley is as always dispassionate and coolly logical and prefers to wait for actual evidence to accumulate before committing himself to an attempted solution.

On the other hand it has to be admitted that both Hanslet and Waghorn are dogged and thorough and once pointed in the right direction they can be relied upon to find any evidence that is capable of being found.

Rhode is sometimes regarded as a writer more concerned about the how than the who when it comes to mysteries. For those who enjoy that approach this book features an extremely clever and original murder method. But those more interested in whodunits should not be disappointed.

Those with a passion for the history of forensic science will be interested in the material about blood and bloodstains, subjects that were only just beginning to be understood in 1936.

This is golden age detective fiction at its purest. No romance sub-plots, no time wasted on characterisation, just an intricate plot that works like clockwork and a remorselessly logical detective (although despite his devotion to logic I personally find Priestley to be quite entertaining as a character). Death at Breakfast achieves exactly what it sets out to achieve. Highly recommended.
Posted by dfordoom at 2:35 AM